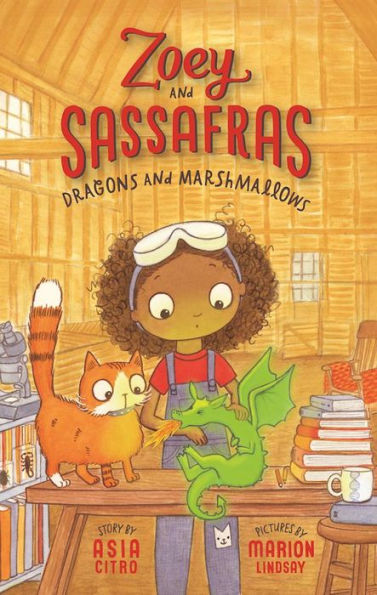 “Zoey I’m so proud. You kept trying even when things got hard,” Mom. –Dragons and Marshmallows

Zoey discovers a glowing photo in her mother’s bedroom and her mother shares an amazing secret. Zoey’s mother has been helping injured animals who come to their backyard barn for help. Since her mom is going on a trip, it’s up to Zoey to keep watch on the magical photo for any animals that appear. But when a baby dragon appears, Zoey isn’t sure how to help. With the help of Sassafras, Zoey’s cat, Zoey must figure out what is wrong with the dragon. Will they be able to help the little dragon before it’s too late?

Dragons and Marshmallows will appeal to younger readers and parents. Zoey is an adventurous, bug-loving girl who uses science to solve problems. The curious cat Sassafras stays by Zoey’s side and adds some humor. Even though much of the conflict revolves around helping a baby dragon, Zoey also worries about her mom going on a trip. Zoey “felt a little nervous about not seeing her for a whole week.”

Little Marshmallow, an adorable magical dragon, is weak and must rely on Zoey for help. Zoey jumps right in and documents her experience in her science journal. In order to help Little Marshmallow, Zoey reads books that have fun reptile facts. After learning about reptiles, Zoey comes up with a hypothesis and makes a list of necessary materials. When Zoey writes in her science journal, the font changes to a large, kid-like font and occasionally uses illustrations. One of the best aspects of the story is that Zoey does not succeed the first time; instead, she makes mistakes and must use trial and error before she succeeds in helping the dragon.

Zoey’s adventure is shown through large black and white illustrations that appear on almost every page. Sassafras appears in many of the pictures, and clearly loves bugs just as much as Zoey. At one point, Zoey tells Sassafras, “I do not trust you out here with my bugs. My new little friends are not a snack!” Readers who are not fluent will need help with some of the vocabulary. However, with short paragraphs, plenty of dialogue, and a simple plot, Dragons and Marshmallows is accessible to most readers.

Dragons and Marshmallows combines magical animals, a relatable character, and the scientific method into an entertaining story that children will love. Zoey and Sassafras will not only entertain readers but also teach important lessons along the way. Readers will learn about reptiles, the importance of eating healthy foods, and perseverance. The end of the book has a glossary that explains unfamiliar terms. Even though Zoey and Sassafras is a series, the books do not need to be read in order. Readers who want more magical animal fun will also enjoy The Last Firehawk Series by Katrina Charman.

“Zoey I’m so proud. You kept trying even when things got hard,” Mom. –Dragons and Marshmallows