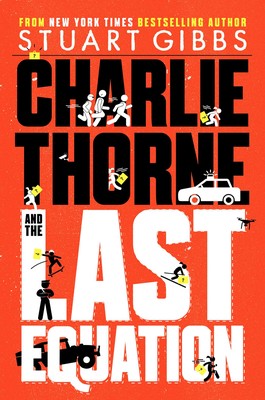 Other books by Stuart Gibbs

“People are getting killed over this equation! Good agents with plenty of training! And I’m only twelve! How could you possibly drag me into this?” Charlie. –Charlie Thorne and the Last Equation

Charlie Thorne and the Last Equation

Decades ago, Albert Einstein devised an equation that could benefit all life on earth—or destroy it. Fearing what would happen if the equation fell into the wrong hands, he hid it away.

But now, a diabolical group known as the Furies are closing in on its location. In desperation, a team of CIA agents drags Charlie into the hunt, needing her brilliance to find it first—even though this means placing her life in grave danger.

In this adventure that spans the globe, Charlie must crack a complex code created by Einstein himself, survive in a world where no one can be trusted, and fight to keep the last equation safe once and for all.

Charlie Thorne and the Last Equation starts with an epic chase scene and continues the fast-paced adventure until the very end. The story is told from Charlie’s point of view, which makes her relatable despite the fact that she is a genius. Even though she is intelligent, Charlie doesn’t always know what to do. But when it comes to difficult situations, Charlie can visualize numbers in her head, which allows her to solve complicated problems. This talent comes in handy when she uses a cipher to reveal Einstein’s message.

Charlie wants to keep Einstein’s equation out of the hands of terrorists and hostile governments, but she’s not sure the U.S. government can be trusted. Charlie is cynical when it comes to the U.S. government. She says, “America’s priorities are pretty darn clear: The first thing we do with any major discovery is try to kill people with it.”

Charlie Thorne and the Last Equation deals with some mature topics including religious extremism, death, and Charlie’s complicated family life. The intense fight scenes, life-or-death chases, and the death of several characters may upset sensitive readers. In addition, the complicated plot is best suited for strong readers. However, readers who are ready for more mature content will have a hard time putting the book down because of the action and mystery.

Charlie’s journey takes readers on a suspenseful trip that will keep readers guessing until the very end. Charlie Thorne and the Last Equation will entertain mystery fans. At the end of Charlie’s adventure, she realizes that “all the talent in the world doesn’t mean a thing if you squander it.” The conclusion wraps up all of the story threads and also leaves readers wanting to know what will happen next. Readers will be eager to pick up the next book in the series, Charlie Thorne and the Lost City.

Other books by Stuart Gibbs

“People are getting killed over this equation! Good agents with plenty of training! And I’m only twelve! How could you possibly drag me into this?” Charlie. –Charlie Thorne and the Last Equation