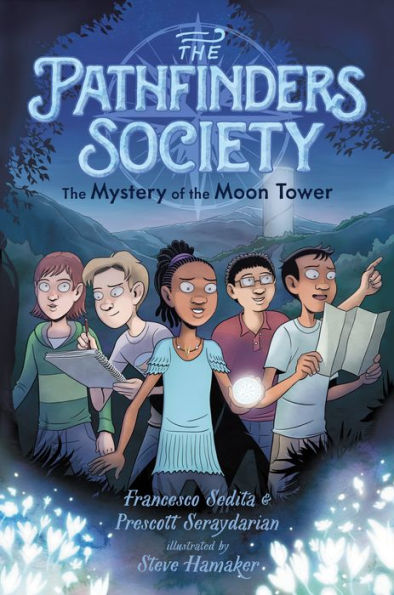 “We’re a team. Each finger can point on its own, but the five together can do anything,” Beth. –The Mystery of the Moon Tower

The Mystery of the Moon Tower

Kyle is a new kid in town who likes to draw. Vic is a cool cheerleader who’s secretly a math whiz. Quiet Beth is a history buff, while goofball Harry likes performing magic tricks with the help of his patient wingman, Nate. These five kids are unlikely to form a team, for sure.

But then they’re thrown together at summer camp, where they watch a grainy old movie about the history of their town (Windrose) and one of its illustrious citizens of a bygone era: the intrepid explorer-inventor Henry Merriweather. He is the one who established their camp. And what is Merriweather’s Camp Pathfinders’ motto? Plus Ultra: more beyond!

The five kids soon find there is indeed “more beyond” in their pokey town with its weird weather and sudden geysers of smelly air. Deciphering a route of historical markers leads them to Merriweather’s old castle, which is lined with ornate, beautiful tiles in hallways that lead to secret rooms full of odd objects—and where time itself is warped!

Kyle, Vic, Beth, Harry, and Nate witness scenes from Merriweather’s past and realize his experiments and eccentricities are pointing toward a path that could lead to the rumored lost treasure of Windrose. The path takes them on a journey through time, through woods, and finally to the looming Moon tower. Will the kids be able to solve the mystery and find the treasure?

Readers who love Scooby Doo mysteries will love the spooky setting that shows the kids lost in a forest, an old castle, and a moon tower. However, unlike Scooby Doo, The Mystery of the Moon Tower’s plot is disjointed and there are a lot of plot holes. The kids hunt for tiles—many of them are attached to plaques detailing historical information—that will lead them to the treasure. However, the historical information is illegible and the characters do not discuss the information on the plaques. In addition, even though the tiles are important in solving the mystery, the reader is still left wondering why they are significant.

The graphic novels’ illustrations will appeal to many readers. The Windrose castle and the woods have wonderful details and the glowing blue light gives the setting a magical feel. The kids are a diverse group both in looks and personalities. Each page has 1 to 6 sentences of dialogue which appear in quote bubbles. The easy-to-read vocabulary makes the story accessible to even the most reluctant readers. Another positive aspect is that the five kids are all introduced at the beginning of the story, which helps the readers understand some of the character’s comments.

Even though The Mystery of the Moon Tower’s plot is underdeveloped, the story sets up what could potentially be an engaging sequel. In addition, the story may spark readers’ curiosity and have them researching Henry Mercer and the Mercer Museum of Doylestown, Pennsylvania. The Mystery of the Moon Tower will entertain mystery fans who like a spooky setting that delves into the past.

“We’re a team. Each finger can point on its own, but the five together can do anything,” Beth. –The Mystery of the Moon Tower