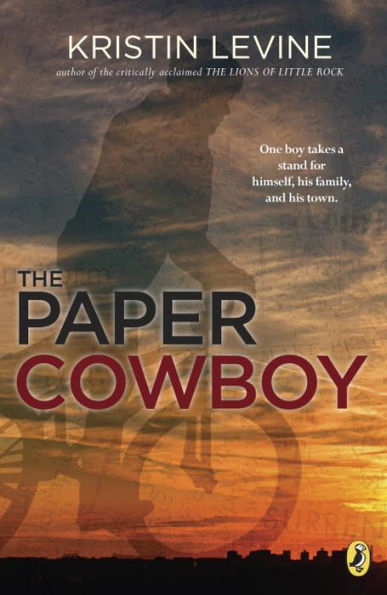 More than anything, Tommy wants to be a cowboy just like the great Gary Cooper or the Lone Ranger, but really he’s more of a bully. He picks on other kids at school, gets into fights, and acts more like one of the bad guys than the cowboy he wants to be. But there’s a reason Tommy misbehaves: things at home are bad. After his sister is badly burned doing a chore that it was Tommy’s turn to do, his mother’s usual moodiness and scoldings turn into beatings. Tommy is racked with guilt. And without his sister, who is hospitalized, he’s left alone to face his mother’s anger.

As the beatings get worse, Tommy’s bullying spirals out of control. He’s even caught stealing from the neighborhood store. Instead of taking his punishment as a true cowboy would, Tommy seeks revenge on the store’s owner, Mr. McKenzie, by framing him as a communist. The results are disastrous.

But in his heart, Tommy knows a cowboy would make things right, so he sets out to find the real communist. But when the real communist is uncovered, it may make Tommy question what it really means to be one of the good guys.

The Paper Cowboy is a compelling story told from Tommy’s point of view. As Tommy navigates through life, he takes inspiration from the cowboys he has seen in movies. Tommy “longed to be a cowboy. Not a bully. But a cowboy who stands up to others. Who fights for the people he loves, for the town they live in.” After Tommy frames Mr. McKenzie for revenge, Tommy is racked with guilt and he becomes convinced that finding the real Commie is the only solution. As Tommy talks about his dilemma, one character says, “It only takes a little poison to ruin a well on a farm, or to spoil a reputation in a big city.” Later, someone tells him, “It doesn’t matter what you intended. The damage has been done. It’s easy to start a rumor. Much harder to stop it.”

The Paper Cowboy portrays the fear of the McCarthy Era by focusing on the townspeople Tommy comes into contact with. It is through these interactions that Tommy stops judging people based on their appearances and instead judges them based on their character. When Tommy is determined to prove that his neighbor, Mrs. Glazov, is a communist, he begins spending time with her hoping that he can find evidence. He thinks she is a communist, but as he learns more about Mrs. Glazov, he begins to like her and wonders, “What was wrong with me?” In the end, Tommy comes to the conclusion that Mrs. Glazov doesn’t belong in jail, even if she is a communist.

Readers will quickly get caught up in Tommy’s world. While Tommy isn’t always likable, readers will empathize with him as he struggles to become a better person, to right his wrongs, and to understand others. The Paper Cowboy takes readers back into time and allows them to understand how the politics of the McCarthy era affected one small town. In the end, Tommy grows into a cowboy, is able to emulate Gary Cooper’s good qualities, and makes his father proud. Tommy’s dad says, “It wasn’t the shoot-out that made Gary Cooper a great man. It was that he cared for others. He faced his problems. He didn’t walk away. He solved them. A good cowboy is a leader who looks after his heard and his posse. No one goes missing.” Tommy’s well-developed voice jumps off the page and his experiences will show readers the importance of finding your own voice and doing what is right.