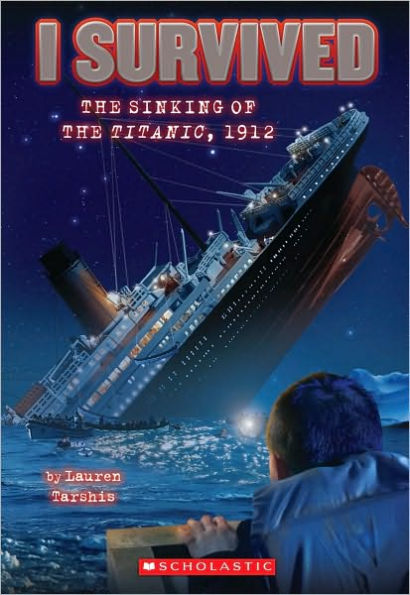 “Mr. Stead chuckled. ‘In any case, nothing can harm this ship. Not even the curse of a mummy!’” –I Survived the Sinking of the Titanic, 1912

I Survived the Sinking of the Titanic, 1912

George Calder must be the luckiest kid alive. He and his little sister, Phoebe, are sailing with their aunt on the Titanic, the greatest ship ever built. George can’t resist exploring every inch of the incredible boat, even if it keeps getting him into trouble.

Then the impossible happens: the Titanic hits an iceberg and water rushes in. George is stranded, alone and afraid, on the sinking skip. He’s always gotten out of trouble before…but how can he survive this?

Readers will relate to George, whose curiosity gets him into trouble. Because George loves to explore, the reader is able to see different areas of the Titanic. In the end, George’s curiosity helps him save his sister and aunt. Even though the story focuses on the Titanic, George is also dealing with the death of his mother, which has caused friction between George and his father. However, George’s relationship with his sister is sweet and adds some humor to the story. Because George has many facets to his personality, the conclusion has several surprises that give depth to the story.

I Survived the Sinking of the Titanic, 1912 answers the broad questions about the day’s events without giving readers a graphic image of the passengers’ deaths. When the ship begins to sink, George’s curiosity and perseverance help keep him and others safe. Even though the story is historical fiction, the ending doesn’t focus on those who died. Instead, the story leaves the reader with a sense of loss and with a sense of hope. In the end, George and his father begin to repair their relationship.

“Mr. Stead chuckled. ‘In any case, nothing can harm this ship. Not even the curse of a mummy!’” –I Survived the Sinking of the Titanic, 1912