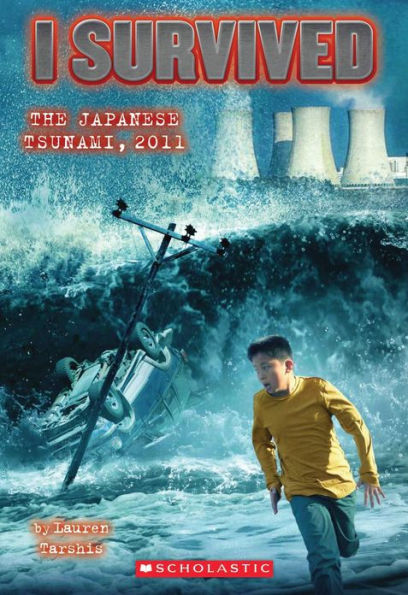 “You have to know that no matter how scared you are, no matter how hopeless things seem, you simply cannot give up home,” Dad. –I Survived the Japanese Tsunami, 2011

I Survived the Japanese Tsunami, 2011

Ben’s father had always wanted to take his family to his hometown in Japan. After he dies, Ben thinks his mom will cancel the trip, but Ben’s mom is determined to visit Shogahama. While in the small coastal village, Ben tries to avoid his uncle. Ben doesn’t want to see the pine forest his father explored, and he doesn’t want to see the cherry tree his father thought was magic. Consumed with grief, Ben refuses to think about his father.

A massive earthquake rocks the village, nearly toppling his uncle’s house. Then, the ocean waters rise and Ben and his family are swept away—and pulled apart—by a terrible tsunami. Ben is alone, stranded in a strange country millions of miles from home. Can he fight hard enough to survive one of the most epic disasters of all time?

When Ben is being swept out to sea, he doesn’t know if he has enough strength to survive. While he is floating in the sea, he thinks back to his dad’s words: “the fear is always there, but you can’t let it take over.” When Ben is trapped in a car, he thinks about his father’s water survival drills. Ben uses this knowledge to break out of the window and escape. Before the tsunami, Ben doesn’t want to think about his father. After the tsunami though, Ben realizes, “It was Dad who got Ben through his moments of panic in the quake, who helped him escape from that drowning car. It was Dad’s wisdom that echoed through Ben’s mind in those dark moments when he was alone in the ruins.”

Full of suspense, I Survived the Japanese Tsunami, 2011 uses kid-friendly descriptions to show the devastation of the tsunami. Even though Ben is scared, he shows bravery when he protects his brother during an earthquake. While the story focuses on the disaster, the story also gives readers a glimpse of Ben’s father’s experiences, which adds depth to the story. Even though the story is about survival, it also highlights the importance of relying on others in difficult times.

I Survived the Japanese Tsunami, 2011 is told from Ben’s point of view, which allows the reader to see the events without graphic details that might scare them. Throughout the story, Ben learns to deal with his grief over his father’s death. Even though the story deals with a natural disaster, it has some unexpected humor that breaks up the tension. In addition, Star Wars fans will enjoy the references to Darth Vader.

The story is accessible to all readers because Tarshis uses short paragraphs and simple sentences. Realistic black and white illustrations are scattered throughout the story and will help readers visualize the events. The story also shows people coming together to help each other during a difficult time. While the story weaves interesting facts throughout, the book also ends with more facts about the earthquake and tsunami of 2011. The I Survived Series gives readers a glimpse into deadly situations without including scary details. Each book is told from a young person’s point of view, which will help readers connect with the narrator.

“You have to know that no matter how scared you are, no matter how hopeless things seem, you simply cannot give up home,” Dad. –I Survived the Japanese Tsunami, 2011