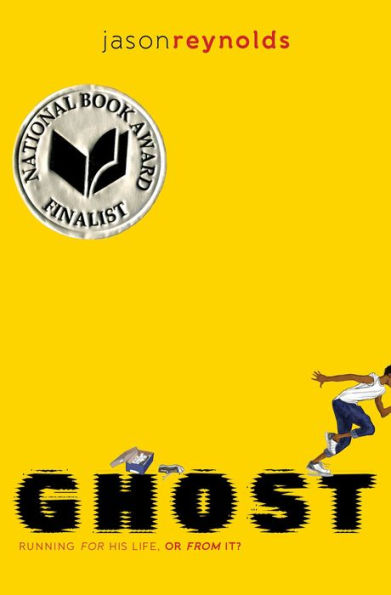 “You can’t run away from who you are, but what you can do is run toward who you want to be,” Coach Brody. —Ghost

Ghost (or Castle Cranshaw, as he would rather not be known) knows how to run all too well, and since the night his father tried to shoot him and his mother, running is all he can do to handle his wild emotions. When he shows up at a running practice, Coach Brody sees Ghost’s natural talent and insists he joins the team with one condition: that Ghost keep his head straight. For Ghost, who has a knack for running into trouble, this might be the most difficult task of all.

Ghost speaks to audiences that are otherwise underrepresented in middle grade literature, as Ghost and his friends are a diverse bunch. Ghost himself lives in a poverty-stricken part of the city. The novel tackles weighty themes like absent/abusive parents, race, and substance abuse; it contextualizes them through the lens of a thirteen-year-old who is learning to come to grips with his rage and fear. Ghost’s story in particular examines the effect of his father’s drinking and imprisonment on Ghost’s emotional state. Characters like Coach Brody and the other runners help him comprehend his situation, and their story is one about forging a new family through track.

As a character, Ghost can be arrogant. He delivers snap judgments of others. At times, he makes questionable decisions, including a major plot point where he shoplifts shoes because he cannot afford them. Despite these traits, he’s a sympathetic character who embodies what it’s like to be a kid dealing with a difficult home life, and emotions like humiliation, rage, and fear. By the end, Ghost realizes he “was the boy with the altercations and the big file. The one who yelled at teachers and punched stupid guys in the face for talking smack. The one who felt…different. And mad. And sad. The one with all the scream inside.” By the end, Ghost learns how to manage his emotions in a healthier way, as running track gives him a productive outlet.

Overall, Ghost is an entertaining read, and Reynolds does a good job delivering realistic characters that display both good and bad qualities. The plot is smart, straightforward, and doesn’t fall into predictable stereotypes. The biggest strength of the book is its ability to relate to students who otherwise don’t have a voice in middle school literature.

Although Ghost will resonate with those who love sports, any reader who has felt lost will relate to Ghost. The story shows how much of an impact one person or team can make in a kid’s life. Ghost is a must-read because it presents a growth in emotional maturity and shows that anything is possible with a support system and self-discipline.

“You can’t run away from who you are, but what you can do is run toward who you want to be,” Coach Brody. —Ghost