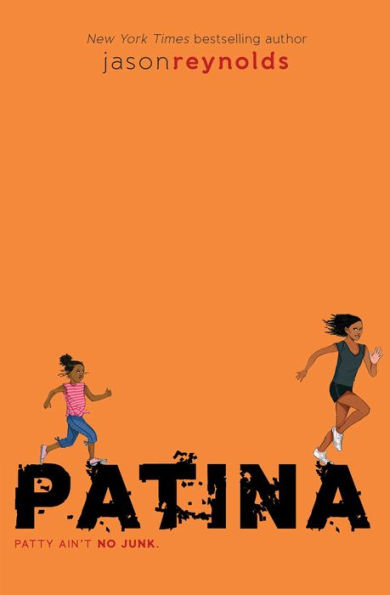 “We are a team, Patty. You can pout and shout, but you cannot check out,” Coach Brody. —Patina

Ever since Patina and Maddy’s mom got diabetes and lost her legs, their lives have changed dramatically. Now they go to the fancy Chester Academy and live with Aunt Emily and Uncle Tony. Patina has fears other than trying to fit in at her school, though. She’s afraid “The Sugar” will take her mom from her too. Patina is finding that no matter how fast she runs, she can’t outrun her fears.

Even worse, Patina’s attitude has slipped, and Coach is making her run in a relay with the people she argues with. Depending on her teammates, especially the ones she doesn’t get along with, seems, well, impossible. When her aunt and Maddy get in a car crash, Patina realizes that depending on others is necessary. When her uncle steps in, it only shows further that she isn’t alone and doesn’t have to be the parent to her younger sister—or herself. She doesn’t have to do everything alone, including the relay. It’s okay to wait for the handoff, both in track and in life.

In the second installment of Reynolds’s Defenders Track Team series, Patina takes over as narrator. Tragedies shape her life: when she was young, one morning her dad never woke up. Her mother then developed Type II diabetes, or what she calls “The Sugar,” and lost her legs. Now, Patina lives with Emily and Tony, and although they’re good people, Patina misses her parents. For someone with her history, it’s no wonder why Patina runs with a chip on her shoulder. Anything less than first place, as far as she’s concerned, is losing. Because she runs for Ma and Maddy, she feels that anything less than first is her failing her family.

Patina is intense and often confrontational, but her fierce loyalty and love for her family make her relatable. With the help of her coaches and teammates, she is able to let go of her independent streak enough to let others in. Patina shows that the world needn’t be entirely on anyone’s shoulders. Not all burdens, especially emotional ones, should be carried alone.

Reynolds has a knack for writing unique characters in specific situations that, despite their specificity, contain universal themes. The power of each book in this series resides within the characters’ capacities to overcome their daunting situations. Patina knows her mom is living on borrowed time and that one day, she will lose her, too. What makes Patina strong is that she’s able to keep running, and she runs for her mom, her sister, her adoptive family, and her teammates. Family, blood-related or otherwise, remains a key component of the Defenders Track Team series, and particularly in Patina’s life.

Patina is a strong sequel to Ghost. The returning cast and newcomers blend together to create a realistic environment for Patina and her cohorts to flourish on and off the track. Track fans and non-sport readers alike will find that this story places importance on friendship and family. Patina’s story emphasizes one of the really beautiful parts of life: no one is ever really alone.

“We are a team, Patty. You can pout and shout, but you cannot check out,” Coach Brody. —Patina