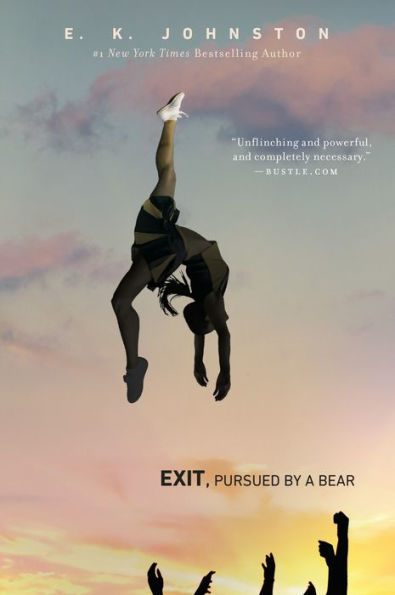 “I will not be a frozen example, a statued monument to there-but-by-the-grace-of-God. I have danced before and I will dance tomorrow,” Hermione Winters. —Exit, Pursued by a Bear

Exit, Pursued by a Bear

Hermione Winters doesn’t want people’s prayers. She’s used to the labels: a Palermo Height’s cheerleader, captain of her team, one of the most popular girls at her school, and Leo’s girlfriend. When someone slips something into her drink one night, she also becomes Hermione Winters, “that raped girl.” With her support system, Hermione must wade through the aftermath of her trauma. Exit, Pursued by a Bear presents the aftermath of a rape through the eyes of a leader who learns more about her inner strength and the strength of her friendships in ways she never could have imagined.

Exit, Pursued by a Bear touches upon sensitive topics including rape and abortion. Johnston handles these topics with seriousness and dignity. Hermione’s experiences with these topics are not universal, but Johnston gives Hermione the tools necessary to come out of these situations in the best way possible. Some readers might be troubled by the fact that Hermione’s situation leaves out some of the nastier aspects. The story focuses more on the good people supporting Hermione and her recovery. The negative reactions from the community towards rape victims exist as barriers occasionally, but Hermione overcomes most of these experiences. Because the story focuses on Hermione reclaiming the good in her life after her trauma, some readers may feel this narrative is too light or too feel-good for the content.

Exit, Pursued by a Bear is powerful because it diverges from the standard commentary about the failures of the justice system and the negative reaction of the community when someone is raped. Instead, the story focuses more on the victim’s reclamation of life. Hermione has a strong voice, is an intelligent leader on her cheer team, and her teammates respect her level head. Although she suffers after a terrible event, she runs on an inner monologue of refusal—she will not stop attending class, she will not quit cheerleading, and she will not be beaten down.

Without her incredible support system, Hermione would have encountered more difficulties. Her best friend Polly, her parents, her teammates, and her coach stand by her with unwavering support in all her decisions. When Hermione finds out that she is pregnant as a result of the rape, her parents and Polly help her proceed with an abortion. When Hermione’s triggers threaten to overtake her, Polly is there to give her the help that she needs. Despite the traumas that Hermione faces, her friends and family stand by her and aid Hermione’s slow return to normalcy.

Exit, Pursued by a Bear tells a different type of narrative about a rape victim, and Johnston succeeds in showing Hermione’s recovery process. Although this story may not be a universal experience, it presents a story where life continues, and the heroine isn’t stuck with being “that raped girl.” Hermione Winters, a future university student, will not have anyone’s judgment but her own. Exit, Pursued by a Bear is a must-read because its displays the strength of heart and mind, and the inspirational spirit that encourages Hermione to never give up the fight.

“I will not be a frozen example, a statued monument to there-but-by-the-grace-of-God. I have danced before and I will dance tomorrow,” Hermione Winters. —Exit, Pursued by a Bear