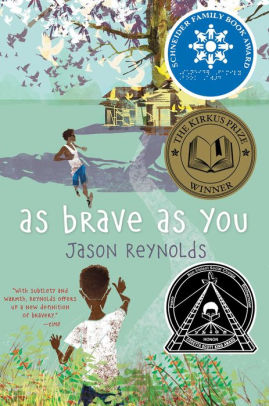 As Brave as You

Genie has a lot of questions. So many questions, in fact, he keeps them all written in his notebook so he can look them up later. When their parents take Genie and his big brother, Ernie, to their grandparents’ house in rural Virginia, Genie has questions that even Google can’t answer. Like how did Grandpop lose his eyesight? Will Ma and Dad stay together? Why doesn’t Ernie want to learn how to shoot a gun?

As Brave as You tackles topics like masculinity, fear, and courage through the eyes of ten-year-old Genie. Although he is younger than Reynolds’s characters from other novels, Genie’s curiosity and kindness make him endearing rather than annoying. Genie’s narration style is filled with his quirks, including his endless questions and his often-humorous thoughts.

Readers will find that Genie is a good role model because he tries to do the right thing. When he makes mistakes, he feels guilty and eventually realizes that he must have the courage to try to make it right. For instance, Genie accidentally breaks an old toy firetruck that belonged to his late uncle. Genie recognizes that his Grandma is upset, and throughout the novel, he searches for parts to fix the firetruck. Through this and other trials, Genie learns that mistakes happen and that becoming a man means that he has to own up to those mistakes.

Genie’s grandparents, parents, and Ernie aid Genie on this journey, as many of them are also learning lessons about what it means to have courage. Grandpop and Genie’s father do not get along most of the novel, and they both are often too stubborn to talk about their past grievances with each other. At the end, they begin to fix their personal issues together. Readers can see that they must be courageous to look past their pride and hurt feelings.

As Brave as You shows that being a man is about having honesty, integrity, and courage rather than about being tough. As part of Ernie’s growth into manhood, Grandpop shows Ernie how to shoot a gun. Ernie shows disinterest, and Genie is unable to comprehend why. However, after an accident with the gun, Genie understands that sharing his fears and emotions is often more courageous than pretending to be tough or prideful. Although these lessons are featured throughout the book, they never come off as preachy.

Reynolds’s characters are relatable for people of all ages. Genie and the older characters learn many of the same lessons despite being at vastly different points in their lives. The story is not particularly fast-paced, but the relationships between the characters make up for the slower moments. As Brave as You is a great story about what it really means to grow up, face our worst fears, and learn from mistakes.