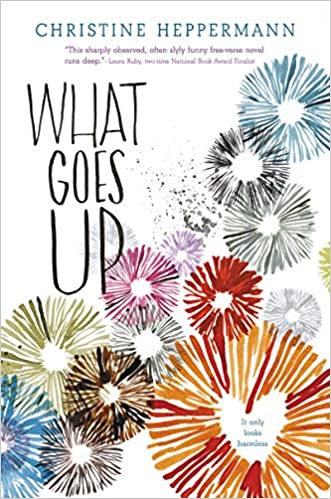 “Normally I lift the cap and find a pattern. And then sometimes there’s nothing but a damp splotch, a slimy mess not worth saving. All I can do is toss it out, and try again” Jorie. —What Goes Up

The past few months have not been ideal for Jorie, to say the least. Her ex-boyfriend, Ian, has left for college, but they are trying to “still be friends.” Her parents’ marriage is on the rocks after her father’s affair and she is struggling to trust him. In addition, Jorie is trying to understand why her mother chose to stay in the relationship. To escape life’s drama, Jorie decides to attend a college party with her boyfriend, Ian, and his two friends.

The next morning, Jorie wakes up in the dorm of an unfamiliar college boy, with a text from Ian that says, “you go and hook up with [one of my friends] right in front of me. You’re such a hypocrite.” Full of regret, Jorie decides to explore what led to this moment and where she goes from here.

What Goes Up is a novel in verse. Since the story is told through poems rather than traditional structure, the story is a little confusing. The reader must pay close attention to keep track of the timeline, as it is not well established. Another confusing element is that the bulk of the book is a series of flashbacks that aren’t in chronological order.

Jorie’s character is explored intimately, and she is easy to sympathize with. Her flaws are present, but they don’t detract from her likability. However, because of the introspective nature of the book, readers don’t learn much about the other characters. This is not a detriment to the overall story as the focus is clearly meant to be on Jorie’s emotions anyway.

Jorie is an artist with an interest in the science of mushrooms and fungi, using mushroom spore prints in her work. The reader will be surprised at how the mushroom and fungi facts parallel Jorie’s experiences and relationships. For example, she discusses signs of toxicity in mushrooms and how “even experts have been fooled by specimens they thought were safe,” clearly alluding to the trouble between her parents.

This breezy, uniquely told story is sometimes confusing. The shortness of the book will undoubtedly leave readers wanting more information about Jorie’s life and her relationships. The book implies that Jorie’s drunken hookup with Ian’s friend is just as big of a betrayal as her father cheating on her mother, which is puzzling. While insensitive, the hookup took place after her and Ian had broken up, so it was not adulterous.

Even though What Goes Up is a bit confusing, it is still a very interesting read that can be enjoyed by seasoned and new readers of verse novels. The writing is witty and charming which balances out the rawness of the serious topics. Overall, this story succeeds in sending out a powerful cautionary message about the domino effect that can be spurred by difficult moments in life and provides an important exploration of whether it is possible to still love someone after a betrayal.

“Normally I lift the cap and find a pattern. And then sometimes there’s nothing but a damp splotch, a slimy mess not worth saving. All I can do is toss it out, and try again” Jorie. —What Goes Up