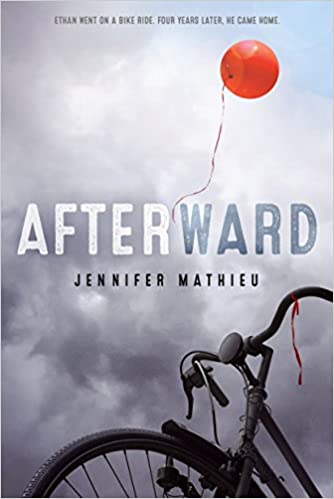 “And then, suddenly, I feel it. Like when you know someone is walking up behind you. Or when you sense that it’s just about to rain. I know that Ethan is telling me something I don’t want to hear but I have to listen to,” Caroline. —Afterward

Ethan was kidnapped four years ago. But when his captor, Marty, brings home a new eleven-year-old boy named Dylan, the police break down Marty’s apartment door shortly after. Now, Marty is dead, and both boys are able to reunite with their families. Ethan’s parents are overwhelmed with relief at having found their only child alive after all this time. While very glad to be home, Ethan himself struggles to readjust after having lost four years of his life to captivity and trauma.

Afterwards switches back and forth between the perspective of Ethan and Dylan’s older sister, Caroline, who feels like she is the only one in her family willing to acknowledge what happened to her brother. Caroline observes, “It’s like my mom wants to act like everything is going to be okay if she just says it over and over enough.” To complicate matters, Dylan is nonverbal autistic, and since the family can’t afford therapy, they can’t understand his trauma. While her parents are attempting to sweep the whole incident under the rug, Caroline knows her brother is suffering and still needs to heal.

After several months, when the media’s cameras have faded away and the rest of the world has moved on, Caroline decides that there is only one person who can give her the information she needs to help Dylan—and herself—deal with the kidnapping. Slowly, a powerful friendship begins to form between the two teenagers who are suffering because of the pain inflicted by the same man.

Since each chapter of Afterward alternates between both Ethan’s and Caroline’s perspectives the reader is able to better understand their interactions with each other.  Readers will sympathize with Ethan as he describes the difficulty of returning to a normal life. He thinks, “I think I probably can’t be fixed at all.” The reader feels the heartache of his struggle and can easily root for him to overcome his trauma. Caroline is a bit more difficult to like. She is rather reckless, and at one point reignites Ethan’s trauma in an act of selfishness. However, Caroline’s more nurturing and considerate side is showcased in her relationship with her brother.

Ethan’s therapist, Dr. Greenberg is a lovely addition to the story as he is professional but personable and he’s the light that guides Ethan along the road to recovery. However, Dylan gets a bit lost in the narrative. Because he disconnects from the world, readers will find it difficult to connect with him. The story becomes more about Ethan and Caroline’s friendship than helping Dylan through the trauma he suffered. The closest the story gets to suggesting Dylan gets the help he needs is Caroline telling her mother that he needs therapy, and the reader can only hope they will find a way to afford it.

Afterward ends with some uncertainty about where the characters will go next. Nonetheless, Afterward is a difficult but heartfelt read that shows that recovering from trauma is possible. The story doesn’t shy away from difficult topics, but it does handle them in a way that is respectful and manageable for a teen reader. Afterward would be a good read for older teens who are looking for a serious and mature story. Readers who want to explore another book that revolves around a kidnapping should read Pretend She’s Here by Luanne Rice.

“And then, suddenly, I feel it. Like when you know someone is walking up behind you. Or when you sense that it’s just about to rain. I know that Ethan is telling me something I don’t want to hear but I have to listen to,” Caroline. —Afterward