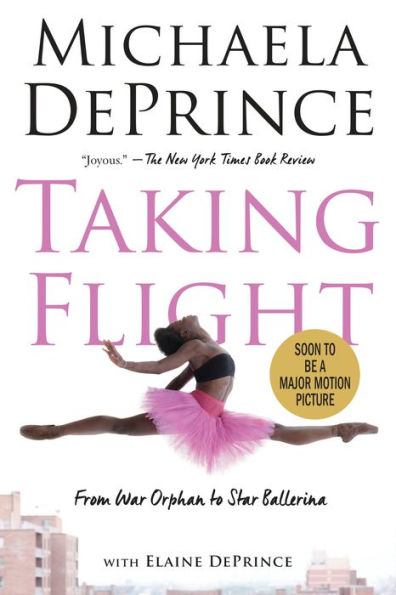 “There will come a day when these girls will no longer be a part of your life, and you’ll no longer care about what they once said about you,” Elaine DePrince. —Taking Flight

Professional ballerina Michaela DePrince hasn’t always lived in the world of ballet. Adopted from war-torn Sierra Leone when she was young, her life was forever changed by her adopted family and a picture of a ballerina, ripped from a magazine, floating in the wind. Upon seeing that ballerina, ballet became DePrince’s love. Taking Flight is DePrince’s memoir of her life as a war orphan who became a professional ballerina in the United States.

Taking Flight begins with many of DePrince’s memories of her native country of Sierra Leone, which was experiencing a destructive civil war. DePrince’s recollections of events are often harrowing. Her birth parents, who were clearly a shining light in her life, died in quick succession due to events surrounding the civil war. She talks about the orphanage that her uncle dragged her to, and the terrible treatment of the children there. However, DePrince’s narration shows that despite the terrible situation, she was still bright and animated, making friends with the other children and making up games.

Much of the story describes DePrince’s experiences in ballet after the DePrince family adopted her with a couple of the other girls from the orphanage. Family is an important feature of her story and considering her earliest memories, it is a relief to watch her life improve thanks to her jovial spirit and the loving people in her life.

DePrince, being a professional ballerina, talks a lot about ballet. When she describes seeing the Nutcracker with her family and eventually performing in various productions of the show, the reader can feel the love she has for her chosen profession. Not all that glitters is gold, however. DePrince also addresses the extreme lack of diversity in the ballet world, and her own struggles being a black ballerina. She sometimes describes comments from other parents, ballerinas, and instructors about her race and how it affects or will affect her dancing in the future.

Despite these obstacles, despite the odds, DePrince is a professional ballerina living well in the United States with her loving family. DePrince ends the book by discussing how she hopes she can be a role model for other aspiring ballerinas and how she wants to help other people affected by war in their home countries. Taking Flight oozes DePrince’s love for ballet and her family. It is a wonderful and wondrous thing that DePrince found a picture of a ballerina that day in Sierra Leone, jump-starting the rest of her life. This book will appeal to people who like dance as well as people looking for a book about overcoming adversity. DePrince had the odds stacked against her, and her story is inspiring for people from all walks of life.

“There will come a day when these girls will no longer be a part of your life, and you’ll no longer care about what they once said about you,” Elaine DePrince. —Taking Flight