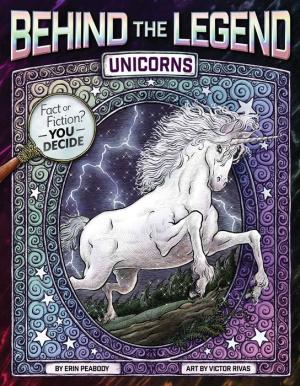 “I should prefer to be right entirely alone than to be wrong. . . with all the rest of the world,” Ambrose Paré, a French doctor. –Unicorns

Behind the Legend: Unicorns

Are elegant, elusive unicorns real, or just a myth? Behind the Legend looks at creatures and monsters throughout history and analyzes them through a scientific, myth-busting lens, debating whether or not the sightings and evidence provided are adequate proof of their existence.

In Unicorns, readers learn about all the sightings and “proof” of unicorns, from stories in history of people like Julius Caesar and Marco Polo who sought unicorns to why they were hunted so fiercely. This book also discusses additional history about the creatures, such as why their horns were so valued in medieval times, their presence in pop culture, and peoples’ ongoing search for unicorns in modern times.

Even though Unicorns is non-fiction, it is filled with many interesting stories explaining how different myths of unicorns started. The book begins in ancient times and goes in chronological order to modern day. Using factual stories, Peabody explains different cultures’ legends including Persia, Greece, China, and Europe.

Unicorn is incredibly engaging and will appeal to even the most reluctant readers. The oversized text and short passages are easy to read. Plus, large black-and-white illustrations appear on almost every page, and they show the reader different drawings of unicorns that appeared in books through the ages. Plus, the illustrations include pictures of some of the historical figures who believed in unicorns.

Peabody explains the reasons that legends of unicorns persisted throughout ancient times. One reason is that “long ago, the idea of investigating a claim or conducting independent research did not exist.” While the book’s cover says, “fact or fiction, you decide,” the book says that today most people believe that unicorns do not exist. Instead, “You may be bummed to learn that many ancient ‘unicorns’ were likely just rhinos, oryx, and narwhals in disguise.” Despite this, readers will be eager to read Unicorns and the book encourages readers to find out more about unicorns by giving a list of more books about unicorns.

“I should prefer to be right entirely alone than to be wrong. . . with all the rest of the world,” Ambrose Paré, a French doctor. –Unicorns