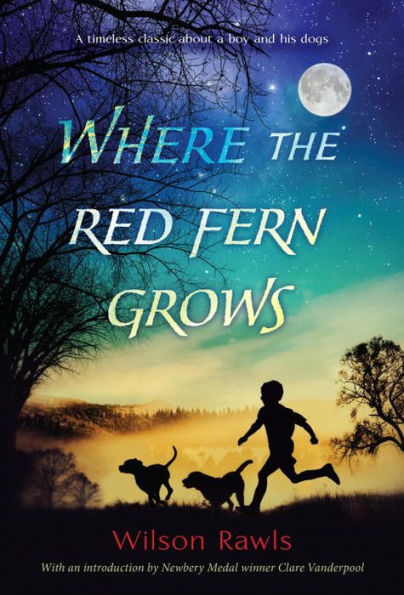 “You can read every day where a dog saved the life of a drowning child, or lay down his life for his master. Some people call it loyalty. I don’t. I may be wrong, but I call it love—the deepest kind of love,” Mr. Kyle. –Where the Red Fern Grows

Where the Red Fern Grows

Billy has long dreamt of owning not one, but two dogs. So when he’s finally able to save up enough money for two pups to call his own, he’s ecstatic. Soon, Billy and his hounds become the finest hunting team in the valley. But tragedy awaits these determined hunters—now friends—and in time, Billy learns that hope can grow out of despair.

Where the Red Fern Grows is a beloved classic that captures the powerful bond between man and man’s best friend. It will stand the test of time as long as there are boys and girls who love their dogs—and dogs who love them.

Where the Red Fern Grows has been taught in schools for decades because of its message and endearing characters. The story is told from Billy’s point of view, which allows the reader to connect with Billy and understand his emotions. Anyone who has loved a pet will connect with Billy and his dogs—Old Dan and Little Ann. Billy works hard in order to earn enough money to buy his dogs. When he brings Old Dan and Little Ann home, Billy spends almost every night hunting with them. These experiences show the two dogs’ dedication to each other and to Billy, which is why many readers will cry at the story’s conclusion.

Throughout the story, Billy has positive interactions with his family, including his grandfather. Through his interactions with his family, his dogs, and others, Billy’s character slowly unfolds. Billy clearly loves nature, his dogs, hunting, and his family. The detailed descriptions of the Ozark Mountains highlight Billy’s love of nature as well as his belief in God. As Billy struggles to understand his world, he often seeks out his parents in order to ask questions about God. In the end, Old Dan and Little Ann were an answer to Billy’s prayers and his mother’s prayers. While the conclusion is likely to cause tears, it effectively highlights the selflessness of love.

Despite the positive aspects of the story, some readers will struggle to understand the culture of the Ozark Mountains during the 1920s and might be upset by the bloody hunting scenes. Unlike many books today, Where the Red Fern Grows isn’t an action-packed story, but instead draws the reader in slowly and makes them fall in love with Old Dan and Little Ann. As a coming-of-age story, Where the Red Fern Grows illustrates the importance of hard work, dedication, and love. The story also focuses on themes of family, sacrifice, God, and death. As Billy matures, he learns valuable life lessons, which are still applicable to today’s readers.

“You can read every day where a dog saved the life of a drowning child, or lay down his life for his master. Some people call it loyalty. I don’t. I may be wrong, but I call it love—the deepest kind of love,” Mr. Kyle. –Where the Red Fern Grows