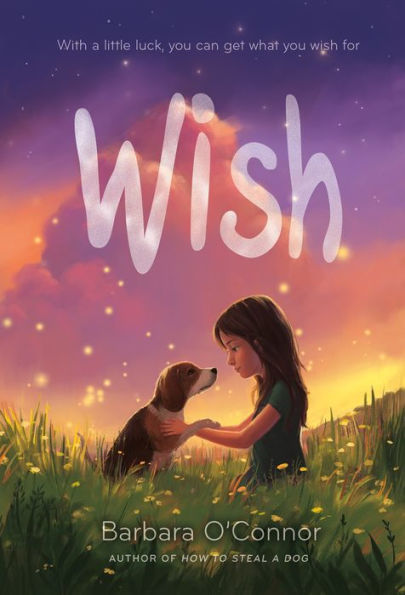 “That familiar mad feeling was settling over me like a blanket. But this time I was feeling mad at myself for being a loser that nobody wanted,” Charlie. –Wish

Charlie has made a wish every day since fourth grade. Then, social services send Charlie to live in Colby with a family that Charlie has never met. Charlie doesn’t let that stop her from making the same wish, but now Charlie wonders if that wish will ever come true.

Charlie doesn’t get along with the “hillbilly” kids at school; however, her backpack buddy, Howard, just won’t go away. When Charlie sees a skinny stray dog, Howard promises to help her capture the dog. With Howard’s help, Charlie is able to befriend the dog who has captured her heart.

When Charlie’s sister, Jackie, comes to visit, Charlie begins to see things in a new light. Jackie points out all of the good things in Charlie’s new home. When Charlie’s social worker tells Charlie that she will soon go home to live with her mother, Charlie wonders why she isn’t excited by the news. After all, wasn’t Charlie hoping to leave Colby?

Charlie is an endearing character who desperately wants a normal family filled with love. Because of her unhappy family life, Charlie is filled with uncertainty and anger. Like many children, Charlie says things that she doesn’t mean, worries about fitting in, and dreams of a better life. Despite Charlie’s anger, Howard befriends Charlie, and she soon learns the true meaning of friendship.

Wish is a compelling story about Charlie’s struggle to understand her broken family life. Charlie’s strong voice allows the reader to understand both her anger and her confusion. Charlie is surrounded by an interesting cast of supporting characters that help her begin to heal. With the help of her foster parents, Gus and Bertha, Charlie begins to realize that possessions don’t make people blessed—love does.

Even though Wish deals with the difficulty of coming from a broken family, Charlie’s feelings are described in ways that young readers will understand. Even though the story focuses on Charlie’s internal struggle, the story contains enough action to propel the story forward. Wish is beautifully written, and each character jumps off the page.

When Charlie allows her anger to get the better of her, she is often surprised by Bertha’s kind reaction. Bertha tells Charlie, “You can’t judge people for the mistakes they make. You judge them for how they fix those mistakes.” In the end, Charlie realizes that she has a “real family,” even if it is different than a traditional two-parent household. Wish is written with compassion and insight that will help readers understand the importance of friendship and family.

“That familiar mad feeling was settling over me like a blanket. But this time I was feeling mad at myself for being a loser that nobody wanted,” Charlie. –Wish