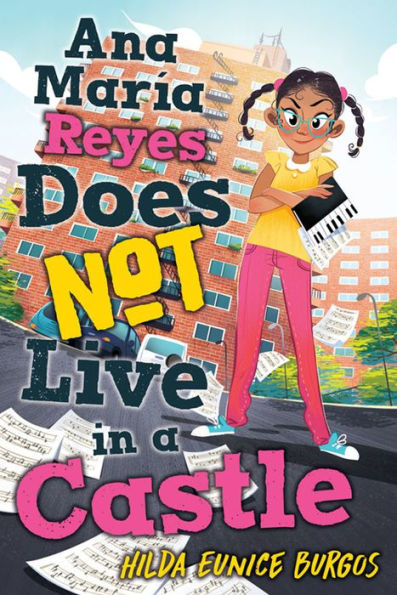 “That’s the great thing about a family. Love is multiplied when there are more people, not divided,” Mami. —Ana María Reyes Does Not Live in a Castle

Ana María Reyes Does Not Live in a Castle

Ana María Reyes’s last name means “kings,” but she doesn’t live in a castle. Instead, she lives in a two-room apartment with too many people—her parents and her three sisters. When her parents tell the family that a new baby is on the way, Ana María isn’t thrilled. With so many people in the house, Ana María wonders why her parents would want another child.

To make matters worse, Ana María is given a chance to earn a scholarship for the Eleanor School, New York City’s best private academy. She is excited at the prospect, but in order to earn the scholarship, she has to amaze the judges at her piano showcase. Every time she tries to practice, something or someone gets in the way!

Then the family takes a trip to the Dominican Republic, and Ana María realizes that while she may not live in a castle, she isn’t as poor as she thought. When disaster strikes her family, Ana María must figure out what’s most important to her. Will following her dreams conflict with doing what’s best for others?

Ana María Reyes does not Live in a Castle follows the struggle of a large first-generation Dominican family living in New York City. Despite having a loving family, Ana María wants more—more space, more attention, and more nice things. She struggles with how her parents always help those in the community, even if it means putting Ana María’s needs aside. When she sees others struggle, Ana María thinks, “other people’s problems weren’t my responsibility. We should take care of ourselves.” However, in the end, she realizes the importance of helping those in need. Unlike many stories, Ana María does not Live in a Castle highlights the fact that giving to others doesn’t always make a person feel good. Sometimes helping others means making painful sacrifices.

Ana María’s story is realistic fiction that deals with the hard topics of substance abuse, child labor, and complicated family relationships. Because the story is written from Ana María’s viewpoint, the topics are covered in child-friendly terms. Ana María feels ignored, but later realizes that she has misinterpreted her mother’s actions. She thinks, “Maybe instead of being mad at Mami for hanging out with my sisters, I should have been thanking her for helping me concentrate on my practicing.”

Despite the fun cover, Ana María Reyes does not Live in a Castle is not a lighthearted children’s story. The number of characters, the tough topics, and the length of the story will be difficult for many readers. The story has some Spanish words, which also may confuse readers. Ana María’s story is interesting, but readers who are still used to illustrated children’s books may have a difficult time finishing Ana María does not Live in a Castle.

The themes of hard work, supporting your family, and giving to others are reinforced throughout the book. In the end, the reader will come away knowing, “That’s one of the great things about family. Nobody’s perfect, but we still love and support each other.” Ana María is a relatable character who learns some valuable lessons. The positive messages in Ana María Reyes does not Live in a Castle make it well worth the read.

“That’s the great thing about a family. Love is multiplied when there are more people, not divided,” Mami. —Ana María Reyes Does Not Live in a Castle