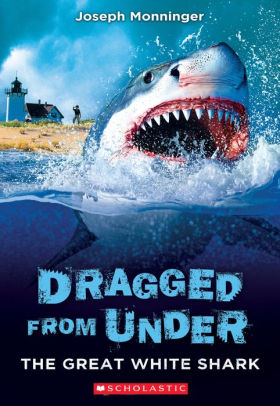 “Barn, you’ve made an enemy! A rich life demands we make a few enemies along the way. If you don’t have a few enemies, you’re not trying hard enough,” Gail. –The Great White Shark

In beautiful Cape Cod, a fatal Great White attack rocks the popular tourist destination. As the beaches are closed and locals grow angry, a recently arrived Barn Whimbril heads straight into the action. But with a group of local teens determined to surf no matter what gets in the way, can Barn safely investigate the attack or will he come face-to-face with the ocean’s most feared apex predator?”

The main protagonist, Barn, is an extremely likable character who is obsessed with sharks. He is joined by his two best friends, Margaret and Fin. Unlike the first installment of the series, Barn’s friends do not play a major role in the story, which may disappoint some readers. Instead of focusing on Barn’s friendships, in The Great White Shark Barn is isolated and spends too much time thinking.

When Barn makes enemies of some local boys, the group begins harassing Barn and his friends. The most vocal instigator is Vince. Like many readers, Barn is uncertain about how to deal with the bullies. When Vince and Barn are pulled out to sea, it is Barn’s knowledge that helps the two survive. Even though Vince and his friends are cruel to Barn, Barn doesn’t consider repaying them with violence. During all of Barn’s conflicts, he never allows hate to rule his emotions.

Barn’s enthusiasm and shark knowledge is a wonderful aspect of the story. Even when he comes face to face with sharks, Barn is still awed by them. While out in the ocean, Barn tells Vince, “They’re looking for food. We’re food. They don’t want to hurt you; they just want to eat you. If we’re lucky . . . they won’t bother us.” Barn’s calm attitude and his willingness to forgive Vince are both admirable traits.

The Great White Shark is not as entertaining as the first installment of the story. One reason is that there is very little interaction between Barn and his friends Margaret and Fin. In addition, some of Barn’s conflict comes from his uncertainty about his mom dating. While the first installment was a fast-paced action story that never had a dull moment, The Great White Shark has a much slower pace.

The Great White Shark will appeal to readers who love sharks and survival stories. One reason that Barn’s story is so captivating, is because Barn isn’t afraid to show his shark knowledge, but at the same time, he is uncertain when it comes to different aspects of his life—like his feelings for Margaret. Readers who want more shark action should read Surrounded by Sharks by Michael Northrop.

“Barn, you’ve made an enemy! A rich life demands we make a few enemies along the way. If you don’t have a few enemies, you’re not trying hard enough,” Gail. –The Great White Shark