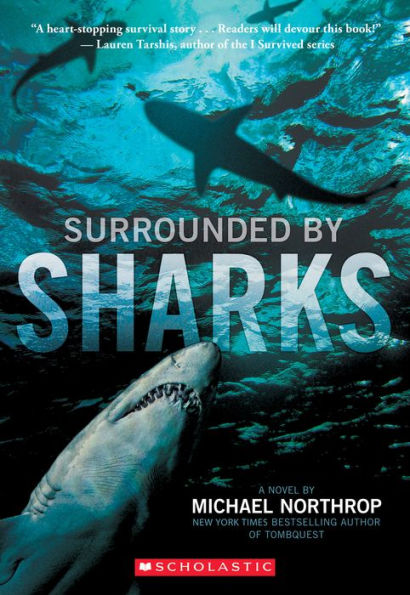 Davy "knew by now that blacktips were a timid, curious sort of shark. He knew just by the fact that he was still alive.” ―Surrounded by Sharks

Early in the morning, Davey wakes up in a small hotel room surrounded by his family. He sneaks out of the room because he doesn’t want to waste any of the vacation sleeping. Davey, with a book in hand, heads to the beach. The beautiful ocean is too much of a temptation for Davey to resist. When he sees the No Swimming sign, he decides to just dip his toes in the water. But the waves tear Davey away from the island and soon he’s miles offshore. He’s surrounded by water—and something else. Sharks are circling below the surface, watching, and waiting. Davey’s terrified he will become the sharks’ next meal. Then no one will find out what happened to him.

Northrop writes with the perfect balance of suspense and action. The short chapters allow the reader to see Davey’s struggle, the sharks’ thoughts, and the action that is taking place back on the island. As the people on the island search for answers about where Davey could have disappeared to, the reader knows that Davey is about to become shark food. Switching between perspectives keeps the reader in suspense to the very end.

Every character in Surrounded by Sharks comes alive and their unique personalities add to the story’s atmosphere. Although the story revolves around Davey’s predicament, there are also several other teens that make the story relatable. While Davey’s two-parent family is not shown to be perfect, they clearly love each other. Surrounded by Sharks is an easy-to-read, suspenseful story that will keep even the most reluctant reader turning the pages until the very end.

Davy "knew by now that blacktips were a timid, curious sort of shark. He knew just by the fact that he was still alive.” ―Surrounded by Sharks