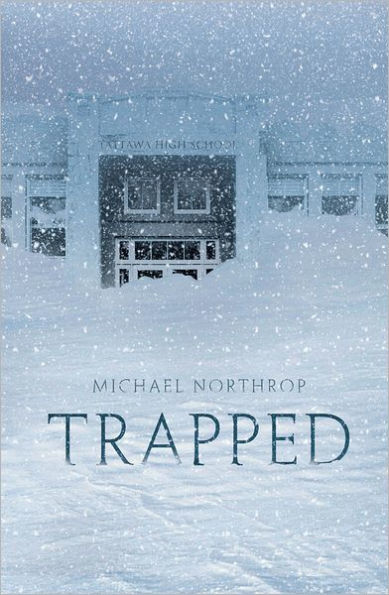 “The oversized goggles he was wearing made him look like a bug, and safety lectures from bugs are hard to take seriously,” Scotty. –Trapped

When the snow started falling, students were excited to be released from school early. Scotty and his friends Pete and Jason are among the last seven kids at their high school waiting to get picked up. But as the snow continues to fall, they realize that no one is coming for them. The boys aren’t too upset about staying the night at the school, especially because there are two pretty girls who are stuck with them.

At first, being trapped in the school doesn’t seem so terrible. After all, they are safe from the snow, and there’s enough food to feed 400 students for a week. But then the power goes out, then the heat, and then the pipes freeze. The students watch as the snow continues to fall. As the days pass, the snow inches higher and higher. Suddenly, the roof shudders and begins to cave in. How will they survive in a freezing school that is in danger of crushing them? Should someone set out for help?

Told from Scotty’s point of view, the story uses a matter-of-fact tone to discuss the disastrous blizzard. Although Scotty is clearly worried about the snow, he also worries about typical teen issues—missing basketball, talking to a pretty girl, getting rid of a big zit, and keeping the peace. Readers will be drawn into the suspenseful story not only because of the impending disaster, but also because Scotty is a relatable teen.

Scotty is trapped in the school with several people that he considers stereotypical teens. He thinks that one boy is a trouble maker and the other is an emotionally disturbed goth. However, when Scotty is forced to spend time with the two boys, he realizes that his perception of them was incorrect.

The ending is abrupt, and although the reader learns what happens to many of the characters, the conclusion does not answer all of the questions about who lives or dies. The story will make readers question why the characters withheld information that may have led to the death of another. The quick read will leave readers wondering what they would do in a similar situation. Trapped is an engaging story that both reluctant and strong readers will enjoy.

“The oversized goggles he was wearing made him look like a bug, and safety lectures from bugs are hard to take seriously,” Scotty. –Trapped