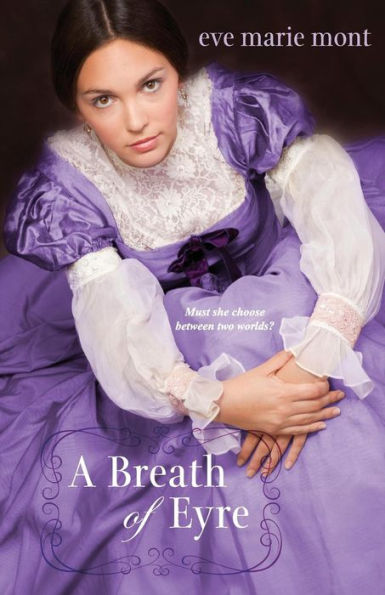 A Breath of Eyre

Going to an exclusive prep school isn’t a dream for Emma. Instead it’s a lonely existence. With no friends, a father who is distant, and a step-mom who thinks she needs therapy, Emma doesn’t think life can get worse. Emma escapes her dreary life by reading Jane Eyre and dreaming about her crush on her English teacher.

As her sophomore year begins, Emma gets a new roommate, Michelle, who offers friendship and relief from her loneliness. However, when Michelle is accused of setting a barn on fire, Emma must decide if the friendship is worth fighting for.

Then a bolt of lightning hits Emma and sends her into the nineteenth century and the body of Jane Eyre.  As a governess, Emma finds peace and soon finds herself attracted to Mr. Rochester. Soon, Emma isn’t sure if she wants to live in Jane’s world or her own.

A Breath of Eyre has Emma jumping for her prep school to the world of Jayne Erye. The premise behind the book is interesting and will keep the reader wondering what happens next. Although A Breath of Eyre referes the book Jane Eyre, it is not necessary to read it to understand A Breath of Eyre. However, the book may be more enjoyable to those who have read Jane Eyre.

Many of the events in the book are typical of a teen novel. Michelle goes to a prep-school and is an outcast because she is on scholarship. The prep-school girls are vicious, but the teachers are afraid to discipline them because their parents have money. There is also a love triangle.

Mont throws in an interesting twist when Michelle travels between worlds; however, the book still lacks loveable characters that draw a reader into the story. The reader will smile because of the sweet conclusion of the book, but getting there will take some effort.