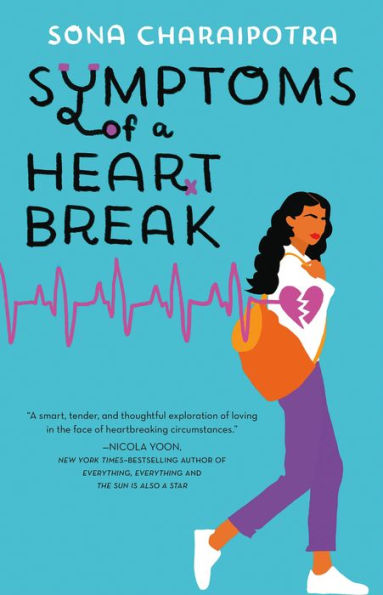 “This job takes more than smarts. There’s an emotional maturity needed that can’t be taught,” Dr. Cho. –Symptoms of a Heartbreak

At age 16, Saira Seghal is the youngest doctor in America. After graduating from prestigious pre-med and medical schools, she has accepted an internship at Princeton Presbyterian, the hospital where her mother works. In addition to being the basis of her mother’s pediatrics practice, Princeton Presbyterian is also where Saira used to accompany her childhood best friend, Harper, to cancer treatments, until Harper’s eventual death from leukemia.

Despite still hurting from her friend’s death eight years ago, Saira is determined to help more people like Harper and has returned to the pediatric oncology department to try to save lives. She is smart and determined, but the internship proves to have unexpected challenges. She gets off to a rocky start with her fellow doctors and has trouble winning the trust of patients’ families, who don’t trust a teenager to treat their sick children.

Things only get more complicated when Saira meets a boy her age in the oncology ward and immediately falls in love. Link Rad—short for Lincoln Radcliffe—is an aspiring musician whose career has been put on hold because of his leukemia remission. When Saira is assigned to his case, her emotions get in the way, and things get awkward. The book follows Saira as she tries to get Link a bone marrow match, prove her competence and maturity to the other doctors, and grapple with the fact that as a doctor, she won’t ever be able to be a normal teenager.

Despite being a prodigy, Saira is a relatable character—sometimes, she’s a little too relatable. Readers might find themselves cringing with second-hand embarrassment when she arrives late to the first day of her internship, breaks hospital rules, and talks back to doctors twice her age. Saira’s family plays a big role in the story; they are both supportive and embarrassing. Readers may enjoy the honest and heartfelt portrayal of a big Indian family and the detailed descriptions of traditional Indian food.

At the heart of the story is Saira’s relationship with Link. They start out awkwardly. Link feels betrayed when he finds out that Saira is a doctor and not a fellow cancer patient. The fact that Saira and Link’s relationship is a forbidden romance makes the relationship awkward instead of heightening the chemistry. However, Link’s character is endearing and charming.

This story is sweet and often sad, but some of the points at the emotional center—Saira’s unusual coming of age, and her grief over her dead childhood friend—aren’t given the space they need to be really effective.  The narrative moves quickly and is jam-packed with subplots, including Saira’s tense relationship with her school friends, four patients’ battles with cancer, and her cousin’s brain tumor. With all this going on in such a short book, it often feels like the story doesn’t leave the reader time to settle into the setting and watch Saira do her everyday work in the hospital. Despite this, fans of hospital dramas may still enjoy this book for its familiar elements and relatable main character. However, if you’re looking for an excellent romance, leave Symptoms of a Heartbreak on the shelf and instead grab I Believe in a Thing Called Love by Maurene Goo or Don’t Date Rosa Santos by Nina Moreno.

“This job takes more than smarts. There’s an emotional maturity needed that can’t be taught,” Dr. Cho. –Symptoms of a Heartbreak