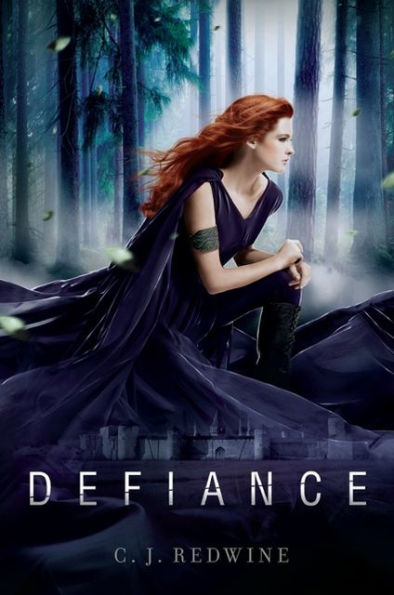 “Diplomacy is a lot easier to accomplish if you’ve got your foe on his knees hoping you don’t lop off his head,” Rachel. –Defiance

Girls in Baalboden learn to be submissive and obey their male Protectors. While other girls learn how to sew dresses, Rachel’s father has been teaching her to survive in the wilderness and wield a sword. When her father, Jared, doesn’t return from a courier mission, everything changes for Rachel. When her father is declared dead, Rachel is assigned a new protector: her father’s apprentice. Now Rachel is commanded to obey Logan, the boy who rejected her two years ago. Rather than meekly obey, Rachel is determined to find her father and prove that he survived the Wasteland.

Logan is many things: orphan, outcast, inventor, apprentice to the city’s top courier. Logan is focused on learning his trade so he can escape the tyranny of Baalboden. But his plan never included being responsible for his mentor’s impulsive daughter. Logan is determined to protect her, but when his escape plan goes wrong and Rachel pays the price, he realizes he has more at stake than disappointing his mentor.

As Rachel and Logan battle their way through the Wasteland, stalked by a monster that can’t be killed and an army of assassins out for blood, they discover romance, heartbreak, and a truth that will incite a war decades in the making.

Even though Rachel is headstrong and capable of defending herself, she is not a very likable character. Rachel often acts impulsively, which almost leads to her death. She is forced to go into the Wasteland with Melkin. When Melkin attacks her, Rachel kills him. Afterwards, she is overcome by guilt because she believes that Melkin wouldn’t have killed her. Although Rachel’s feeling of guilt is understandable, her reasoning doesn’t make sense. This is just one of many frustrating inconsistencies in this story that just don’t make sense.

While Defiance has some action-packed scenes, too much time is devoted to Rachel finding her father and then returning to the city. When Rachel finally makes it to her destination, she learns that her father has died, but left her a package, which Logan is supposed to destroy. Because of this, Rachel’s long journey into the Wasteland and back to Baalboden seems pointless.

Defiance jumps back and forth between Rachel’s and Logan’s points of view. Even though this allows the reader to understand both of their thoughts, readers may still have a hard time relating to either character. Much of the plot is devoted to the characters’ inner monologues, which revolve around their feelings for each other. Many of their troubles could have been easily prevented if they would have talked to each other. In addition, Logan is inconsiderate, controlling, and only thinks about himself. Unfortunately, there is little to like about Rachel or Logan.

The predictable villain, the characters’ inner monologues, and the plot inconsistencies will frustrate readers. The world building is so vague that it does little to add to the dystopian plot. Unfortunately, Defiance is an underdeveloped, forgettable story. If you’re looking for a must read end-of-the-world novel, you should leave Defiance on the shelf and instead read The Host by Stephanie Myer.

“Diplomacy is a lot easier to accomplish if you’ve got your foe on his knees hoping you don’t lop off his head,” Rachel. –Defiance