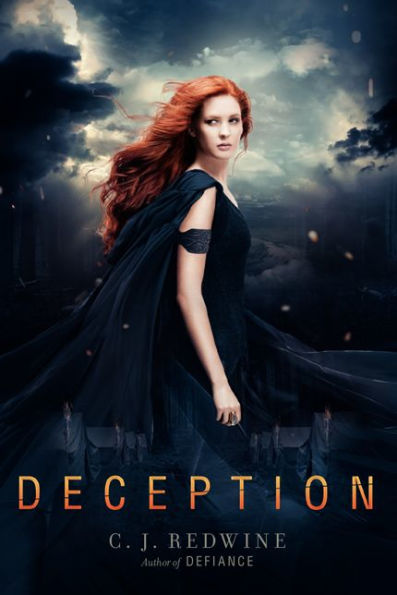 “It’s a hard thing to have someone give their life for yours,” Quinn says quietly. “The debt feels impossible to repay.” –Deception

When Baalboden is destroyed, the survivors are left to fend for themselves. The ragtag group elect Logan as their leader. With Rachel by his side, Logan is determined to get the survivors to the safety of another city-state. The survivors must leave the ruins of their home and take their chances in the Wasteland. But the Commander and a rival city-state’s army both want to take the device that controls the Cursed One for themselves.

Soon, it becomes clear that the survivors have a traitor among their ranks, who is killing them. Both Rachel and Logan are put under an unbearable strain, causing Logan and Rachel to wonder if their love will be shattered. Soon, everyone is questioning if they can survive the Wasteland.

The second book of the Defiance Series has wide plot holes, long and unrealistic fight scenes, and underdeveloped characters. Even though the story’s point of view alternates between Logan and Rachel, the two are frustrating characters to follow.

Rachel’s father trained her to defend herself, and Rachel is portrayed as an excellent fighter who can defeat male soldiers. Her daring acts in battle are described in long descriptive scenes that are completely unrealistic. In addition, Rachel is amazingly self-centered. When Rachel’s best friend Sylph dies, Rachel is distraught and only thinks about how Sylph’s death will affect her. Instead of being a heart-wrenching moment, Sylph is so underdeveloped that her death has little impact on the reader.

Most of the time, Logan only thinks about keeping Rachel alive. He feels guilty about everything and doesn’t trust anyone in his inner circle to help him keep the survivors safe. Even though Logan is surrounded by others who are older and more knowledgeable, Logan acts as if he is the only one intelligent enough to save the survivors. He over-thinks every situation and doubts his own abilities, but is still arrogant enough to think only he can find the solution to every problem. Plus, Logan’s repetitive inner dialogue is annoying.

This dystopian novel blends action and romance together; however, the story’s many flaws will leave readers wishing that they had left the book on the shelf. If you’re looking for an entertaining dystopian romance, you should read The Selection Series by Kiera Cass and the Matched Trilogy by Ally Condie.

“It’s a hard thing to have someone give their life for yours,” Quinn says quietly. “The debt feels impossible to repay.” –Deception