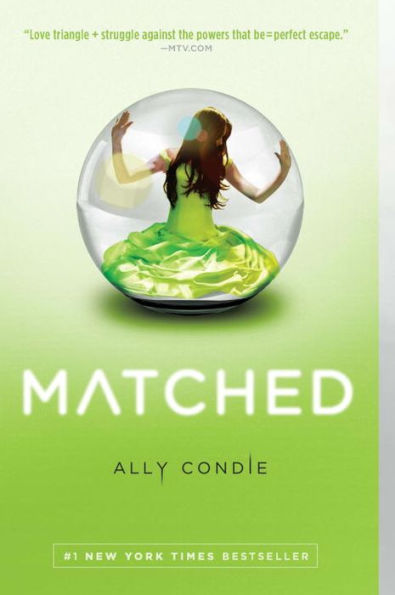 "I am trapped in glass and I want to break out and breath deep, but I'm too afraid that it will hurt," Cassie. —Matched

Every aspect of Cassia’s life is perfectly planned out for her—her profession, her future husband, her dwelling. If she follows the path the Officials have planned she will be happy.  Or so she thought.

During Cassia’s matching ceremony, she is ecstatic to find out that her perfect match is her best friend Xander.  But in a strange twist of events, when she opens a file that is supposed to contain facts about her matched, Xander, another’s face appears. The face of a boy named Ky, her first matched, who was discarded by the Officials as an aberration. It only takes an instant to plant doubt into Cassia’s mind about whom she will choose to love—Xander or Ky?

As Cassia struggles to choose between Xander, who will give her a perfect life, and Ky, who can give her passion, she begins to question the foundation of her society.  Is it as perfect as it appears?  And can she live in a world where every choice and every freedom—including the freedom to choose love—is taken away?

Matched is an entertaining book that revolves around Cassia’s discovery that her society is not all that appears.  She soon discovers that although she loves Xander, she feels a passion for Ky that cannot be matched.  The book also incorporates Cassia’s relationship with her parents into the story.  It is clear that Cassia’s parents love her and want what is best, even if that means going against the Officials.

Cassia struggles with her conflicted feelings for Ky and Xander, which is a topic that teens will be able to relate to.  Because Cassia generally cares for both boys, her decision is that much harder to make.  However, the plot does not only revolve around Cassia’s love triangle.  Instead, the author includes Cassia’s family’s and friend’s experiences to show that the Society isn’t always what it appears. Unlike many teen books, Match portrays a two-parent family that is not dysfunctional. They genuinely care for each other.   The violence in the book is not described in detail, which makes this book suitable for younger readers.

"I am trapped in glass and I want to break out and breath deep, but I'm too afraid that it will hurt," Cassie. —Matched