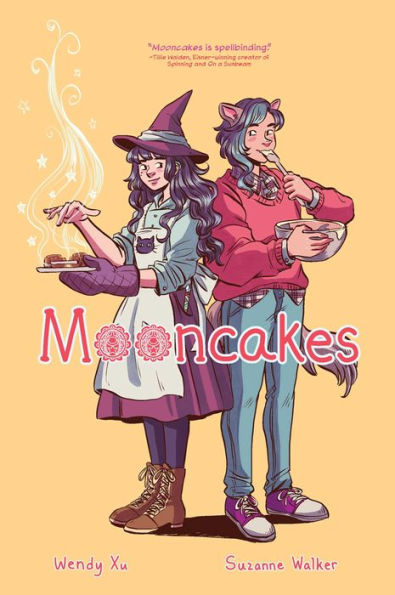 “I thought coming back here would make things right. And it did, but not because of the place. . . Home is where you are, okay?” Tam. –Mooncakes

Teen witch, Nova, hears rumors of strange lights in the forest. When she goes to investigate, she sees a white wolf and discovers her childhood crush—werewolf Tam Lang. Tam is trying to outrun a cult of witches, who want to use his werewolf magic to unleash a demon. With the help of Nova’s Nanas, Tam and Nova try to stop the dark forces that want to claim Tam’s magic for evil.

Mooncakes’ illustrations use darker fall colors to beautifully show a world where magic exists. One of the best aspects of Mooncakes is its large cast of diverse characters. Both Nova and Tam are Chinese American, and Tam is non-binary and uses the pronoun “they.” Nova’s family is completely accepting of Nova and Tam’s romantic relationship. Nova’s two Nana’s are charming, accepting, and support both Nova and Tam. In addition, Nova relies on hearing aids and even uses them as part of her magic.

Mooncakes is a story of friendship, family, and romance. One of the best aspects of the story is the characters who accept and support each other. Despite this, the character development and the weak plot leave a lot to be desired. While the story shows some of Nova’s and Tam’s backstory, the plot moves too quickly for readers to really care about the two main characters. They fall in love quickly, and predictably. It is this love that allows Tam to overcome the demon.

The story revolves around magic, and the characters are seen making potions several times. However, the magic is mostly represented through bright lights, and the scenes that rely on magic are often confusing. Likewise, when Tam is introduced to Nova’s family, their celebration is too short and leaves too many questions. For example, why are Nova’s parents ghosts? Why do Nova’s parents want her to move away from her Nanas? Why does her uncle have the head of a bird?

Mooncakes will appeal to a large audience and is a good choice for reluctant readers. The pages are broken up into panels and have 2 to 7 simple sentences on each page. The illustrations show the characters’ emotions and use colors to switch from the warm feelings of Nova’s house to darker colors for the creepy, dangerous scenes. Readers interested in magic and romance will enjoy Mooncakes’ fast pace; however, the characters will quickly fade from their memory.

“I thought coming back here would make things right. And it did, but not because of the place. . . Home is where you are, okay?” Tam. –Mooncakes