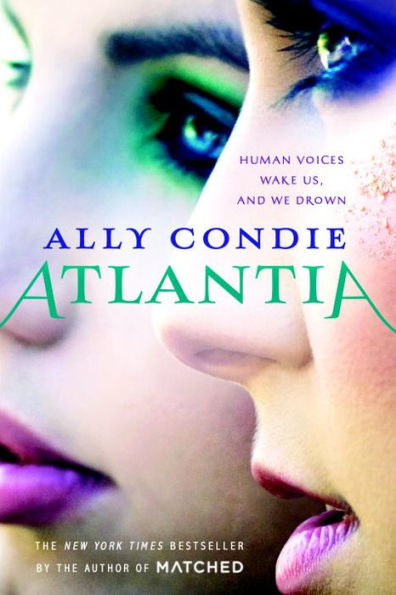 The underwater world of Atlantia has been Rio’s home forever, but she dreams of living in the Above. When Rio has the chance to choose where to live, she wanted to choose the Above. But when her mother dies everything changes. Rio knows she must stay in the Below with her sister Bay. But when the day to choose comes, Bay makes the unexpected decision to go Above. Rio is stranded in the Below with no family. Now Rio only has questions. Was her mother murdered? If so, who wanted her dead? Why did Bay choose to go to the Above?

While Rio searches for her answers, she must hide her own secret. She has always hidden her powerful siren voice. When Rio’s estranged aunt Marie suddenly takes an interest in her, Rio wonders if Marie has discovered her secret. Can Marie be trusted to help Rio go Above, or will Marie lead her into danger? Rio hopes that Marie can answer her questions, but soon she learns that Atlantia’s history is more complex than the people have been told. Rio must listen to the voices of the past. And in the process, she hopes to save herself and her city.

The world of Atlantia is described in beautiful detail; however, the descriptions of a complex religion and history of the city make the beginning of the story slow. Although Rio is an interesting character, many may have a difficult time relating to her. When her sister Bay leaves to go to the Above, Rio is devastated and only thinks about how to join her sister in the Above. Because Rio had always planned to leave her sister, her motivation for going Above doesn’t ring true.

Atlantia is full of mystery, intrigue, and a dash of romance. Told from Rio’s point of view, readers get a look into what the world could look like if people destroy the land above the sea. Through Rio’s experiences, the reader will learn several positive messages including the importance of speaking up for yourself and others. Rio learns that many of the problems between the Above and the Below come from misunderstandings and fear. “People fear those who are different when really we are so much the same.” Rio realizes that “in order to save our city, we have to love each other more than ourselves.”

The ending of the story leaves a lot of unanswered questions, but it also has several surprises. Readers who want to read about mermaids should leave Atlantia on the shelf. Even though the story has sirens, the sirens are humans with a voice that can control people. If you enjoyed Ally Condie’s Matched series, and want to read more from the same author, just be aware that Atlantia is lacking the same action and suspense that makes the Matched series so enjoyable. Readers will either love or hate Atlantia. Some will find the slow pace and the lack of character development frustrating. However, others won’t be able to put the book down because of the mystery and the interesting premise.