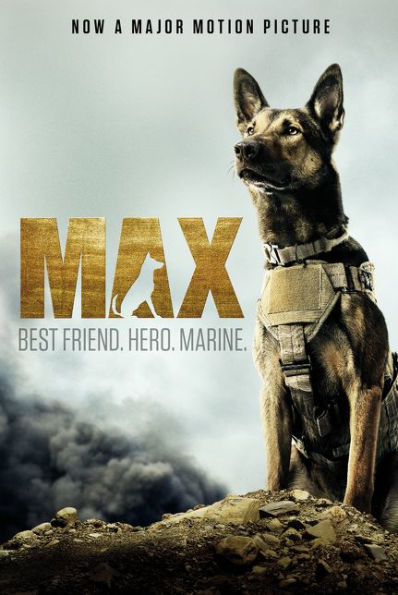 “If Justin was being honest with himself, he had been angry at Kyle the day he had shipped out,” Justin -Max: Best Friend. Hero. Marine.

When Justin finds out his older brother, Kyle, has been killed overseas, Justin is devastated. Kyle was a marine, a hero trying to live up to his father’s reputation, yet in an instant his life was over. Now, Kyle’s only connection to Justin is Max, Kyle’s former canine partner and a discharged K-9 marine.

When Max was at Kyle’s side, he was meant to sniff out explosives, search for enemy soldiers and weapons, and keep Kyle and his unit alive. Max, just like Kyle, was trained for war. He was trained to be a hero. While Max’s presence doesn’t make it easy for Justin and his parents to grieve, they soon discover that without a home, Max will be put down. With no home to place Max in, Kyle’s partner is placed in Justin’s care.

After Kyle’s death, it isn’t easy for Justin and his family to see Max alive and well. It isn’t easy for Max to move on from his days on the frontlines. Most people misunderstand Max, believing he is too aggressive. Max isn’t meant to be a pet. He is meant to be a hero. Justin is the only one who understands Max is also grieving for Kyle. Both Justin and Max find it difficult to adjust to each other. Soon the two bond over Kyle’s death, supporting each other and giving each other a purpose.

When Tyler, Kyle’s best friend, is discharged from the marines, Justin begins to ask questions. Justin and Max work together to figure out what really happened to Kyle. Can they find the truth and still protect Justin’s family from the dangerous people Tyler is working with?

Shotz’s novel about a war dog coming home to his handler’s family is a wonderfully wholesome story. Justin and his family are well-written characters that deal with the guilt, shame, and sadness that accompanies a loved one’s death. Max serves as the means to which Justin’s family can work out their emotions surrounding Kyle’s death, as well as the means to which everyone comes together in the end. Max is also a stand in for Kyle; since Kyle is gone, Max helps Justin protect his family and sniff out Tyler’s true intentions, just as Kyle would have done.

Max: Best Friend. Hero. Marine. shows that heroes come in many forms. Kyle is considered a hero because he followed in his father’s footsteps and joined the marines. Justin struggles with his father’s pressure to live up to his brother’s legend. Justin’s father, who was discharged early on from the marines because of a leg injury, struggles to connect with Justin because Justin doesn’t want to be a marine. However, Justin proves himself to be as much of a hero as Kyle. At the end of the story, Justin earns his dad’s trust and lives up to Kyle’s memory.

Unlike Kyle, Tyler chose to lie and deceive his best friend’s family in order to smuggle weapons across the border. Tyler will eliminate anyone that stands in his way. The story emphasizes that someone doesn’t need to go into the military to be a hero, and that not all marines are heroes.

Max: Best Friend. Hero. Marine. is fast-paced, and the suspense builds from the moment Justin’s family is told Kyle has died. The believable twists will keep readers turning the page until they reach the heartwarming conclusion. Max: Best Friend. Hero. Marine. is a must-read because of the realistic characters and wonderful storytelling. For more heroic dog stories, try the G.I. Dogs Series by Laurie Calkhoven.

“If Justin was being honest with himself, he had been angry at Kyle the day he had shipped out,” Justin -Max: Best Friend. Hero. Marine.