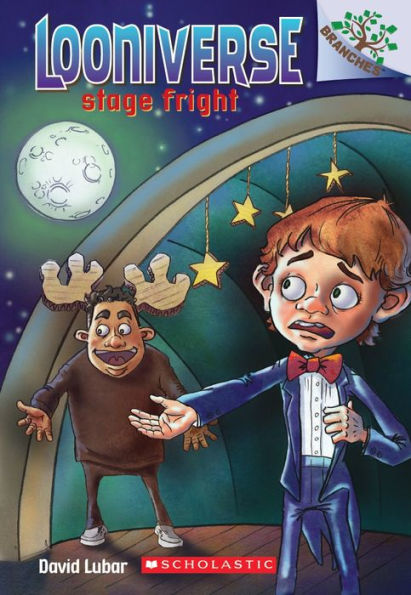 “I’ve learned that a little strangeness is good for the world. It helps people come up with new ideas,” Ed. —Stage Fright

Ed and his friends accidentally enter a writing contest. They do their best to create a wacky play that no one will like. Their wacky play is chosen to be performed on the night of a blue moon. Ed tries to keep his strangeness under control, but it’s difficult to watch every word he speaks. Can Ed keep the strangeness under control? Will the blue moon make even stranger events happen?

The fourth installment of the Loonivers Series keeps all of the same lovable characters from the previous books. Ed really wants to keep the strangeness at bay, so he is careful with every word he says. This conflict adds fun and suspense as Ed visualizes what would happen if he said the wrong thing. For example, he imagines saying “I laughed my head off.” He then imagines his head floating off his body.

Easy-to-read text and fun illustrations make Stage Fright a good choice for beginning readers. The plot does not revolve around the previous books in the series. However, the story does make a few references to previous books. Stage Fright will delight younger readers with the outrageous events, the silly illustrations, and the reoccurring characters. If you’re looking for a silly series that teaches as well as entertains, Stage Fright will be an excellent addition to your child’s library.

“I’ve learned that a little strangeness is good for the world. It helps people come up with new ideas,” Ed. —Stage Fright