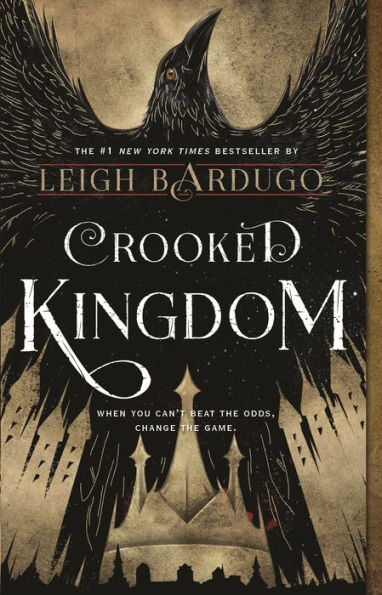 Other books by Leigh Bardugo

“I’m a thief and a smuggler. Try to catch hold of me and you’ll find you’re trying to hold air,” Kaz. –Crooked Kingdom

When Jan Van Eck, a member the Merchant Council of Kerch, hired Kaz Brekker and his team to infiltrate the infamous Ice Court to extract the maker of the drug jurda parem, no one believed they really stood a chance. Yet Kaz, Inej, Wylan, Jesper, Matthias and Nina pulled it off, even if it was just barely. They extracted the drug maker’s son, Kuwei Yul-Bo, and were ready to receive the money that would make all their dreams come true. At least, until Van Eck betrayed them all and kidnapped Inej.

And the problems don’t stop there. Ketterdam has become a dangerous city, one that sees old and new enemies stream in to get a hold of Kuwei’s knowledge of jurda parem. To corner Kaz and his team, Van Eck will force the group to test their loyalties and use up all the wit they have to offer. With nowhere to run, there’s only one option available to Kaz: fight back.

While wanted posters display Kaz and his crew, the six are busy planning and plotting to find a way to get everything they’re owed. They’ll save Inej, get Kuwei out of the city, and make Ketterdam theirs again. One way or another, they’ll even the score.

Bardugo’s Crooked Kingdom is just as fun and exciting as the first novel. Building off their trip into the Ice Court, Crooked Kingdom delves deeper into the main conflict between Kaz’s crew and Jan Van Eck. From the very beginning, the claustrophobia of Ketterdam, its sense of despair, and its dwindling hope take center stage, laying the foundation for the story to push the main characters into finding their own way out of the hole they’ve found themselves in.

That’s where the main theme of standing up for yourself comes in. Learning to fight for yourself in a cruel, greedy world comes across easily through Kaz’s determination to see his crew properly rewarded for helping stop the production of jurda parem, the drug that enhances Grisha power. This theme also comes through with the other five main characters, like Inej’s desire to hire a ship and go after slavers or Wylan’s realization that he needs to overcome his father. It’s safe to say that each member of Kaz’s crew is a role model in their own right. Each person grows stronger from the trials they encounter.

Overall, Crooked Kingdom is a wonderful follow-up to Six of Crows. This sequel is definitely a must-read. The book is chock full of action, suspense, and plot twists from beginning to end. The main cast of characters really shine in the hectic moments of the plot. While the pacing can feel relentless at times, that only raises the stakes.

Other books by Leigh Bardugo

“I’m a thief and a smuggler. Try to catch hold of me and you’ll find you’re trying to hold air,” Kaz. –Crooked Kingdom