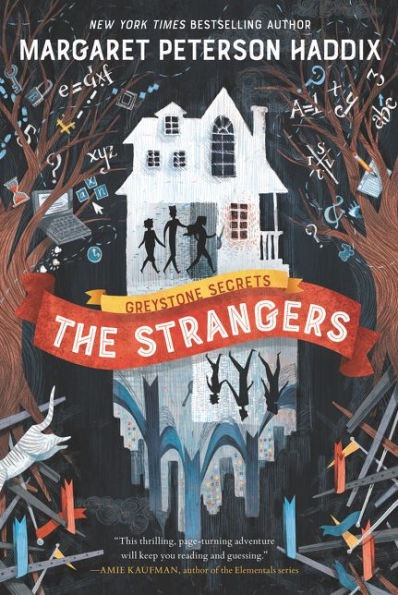 Emma thought, “Love was what mattered most. But logic was how Emma could make love win.” –The Strangers

What makes you you? The Greystone kids thought they knew. Chess has always been the protector over his younger siblings, Emma loves math, and Finn does what Finn does best—acting silly and being adored. They’ve been a happy family, just the three of them and their mom.

But everything changes when reports of three kidnapped children reach the Greystone kids, and they’re shocked by the startling similarities between themselves and these complete strangers. The other kids share their same first and middle names. They’re the same ages. They even have identical birthdays. Who, exactly, are these strangers?

Before Chess, Emma, and Finn can question their mom about it, she takes off on a sudden work trip and leaves them in the care of Mrs. Morales and her daughter, Natalie. But puzzling clues left behind lead to complex codes, hidden rooms, and a dangerous secret that will turn their world upside down.

The Greystone kids discover a portal to a parallel universe that is frighteningly different from their own world. While The Strangers has an interesting premise, the story leaves readers with too many questions as well as some frustrating, unrealistic details. For example, several times the kids travel to the parallel world while Mrs. Morales waits in the car. And when Mrs. Morales unknowingly goes to the parallel universe, she doesn’t realize that she is in a different world. Instead of fully developing the parallel universe, the characters spend little time there. Most of the action comes from figuring out what happened to their mother and how they can decode their mother’s message.

Each chapter of the story switches between Chess’s, Emma’s, and Fin’s points of view. Each character’s picture appears at the beginning of the chapter, which helps the reader keep track of the changing point of view. Each character brings an interesting perspective to the story and allows readers to see how the events affect each person differently. In addition, key ideas and events are often repeated in order to help readers keep track of all of the important developments.

The Strangers will appeal to both mystery and fantasy fans. However, the complicated plot, difficult vocabulary, and switching points of view make The Strangers appropriate for strong readers. Full of interesting plot twists, The Strangers ends with a cliffhanger that will leave readers wondering what happens next. The Greystone kids’ story continues in the second book in the series, The Deceivers.

Emma thought, “Love was what mattered most. But logic was how Emma could make love win.” –The Strangers