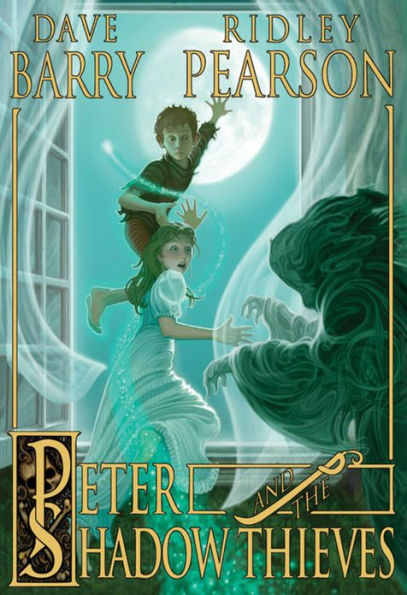 “[His] message ended with a strange warning. The warning was ‘Beware the shadows,’”  Louise, Molly’s Mother. - Peter and the Shadow Thieves

Peter and the Shadow Thieves

Peter has been having a grand old time on his island, dubbed Never Land, despite some squabbles with the pirates who live there. However, when a strange ship docks looking for the starstuff, Peter’s peace is shattered. He overhears a strange shadow-like creature threatening Molly, and makes a snap decision to follow the ship to London in order to warn her.

Peter is not prepared when he reaches London. He has to keep Tink, his fairy or birdgirl, hidden. He doesn’t have shoes or a coat, he doesn’t know where Molly lives, or how to survive on the streets of London. Obstacle after obstacle gets in Peter’s way. Will it be too late to save Molly from the shadow thief and its strange powers? And will Peter ever get back to Never Land, to rescue his friends who’ve been captured by the pirates in his absence?

Peter and the Shadow Thieves is packed full of adventure from start to finish. This installment jumps from many different third-person points of view, allowing readers to see what’s happening on Never Land, with Peter and Molly in London and with the bad guys all at once. While the changes in perspective are clear, readers might not enjoy jumping from the main thread with Peter and Molly in England to Never Land every so often, as it reduces the suspense of the main storyline.

While Peter further learns the importance of working together, Molly uncharacteristically throws a tantrum, reveals the starcatchers’ secrets, and nearly ruins her father’s important mission. Despite her childish behavior, her father forgives her and thanks her for her bravery, which is not believable.

However, fans of Peter and the Starcatchers will be pleased with the second installment in the series. Readers will get to see all the beloved characters from the first book, along with some new friends and a frightening new villain. Timid readers may have nightmares about Lord Ombra, the terrifying shadow thief, who can steal shadows and control minds. More adventurous readers will be thrilled at the continuous suspense, twist and turns, and non-stop adventure that is thus far the hallmark of this series.

This book wraps up its major plot points while leaving plenty of questions that will leave readers eagerly reaching for the next book, Peter and the Secret of Rundoon. With plenty of action but not much violence, this is a great series for those readers itching for more exciting adventures who may not yet be ready for more mature content.

“[His] message ended with a strange warning. The warning was ‘Beware the shadows,’”  Louise, Molly’s Mother. - Peter and the Shadow Thieves