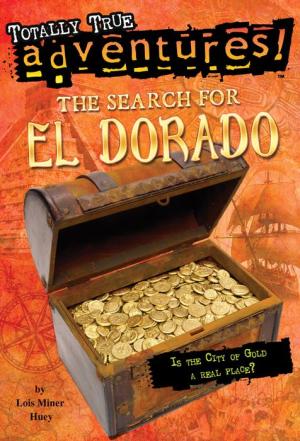 “Gold is a wonderful thing! Whoever owns it is lord of all he wants,” Columbus. –The Search for El Dorado

The Search for El Dorado

Towers of gold! Glittering streets! Jewels, coins, and more! Early Spanish explorers heard a story about El Dorado. It was a lost city in the Americans, made of gold. The explorers believed they could find it. Soon the story became a legend, and the legend changed the world. But the city of El Dorado has not been found. . . yet.

The book begins by explaining the Muisca tribe’s traditions and beliefs, which is where the legend of El Dorado most likely started. Then in the 1400s, the Europeans thirst for gold and riches caused explorers to begin searching for the mythical city. In search of a new trade route, Christopher Columbus set sail, looking for a way to get from Europe to Asia. Columbus’s travels inspired others to travel to the Americas in search of gold. The Search for El Dorado explains how the European’s search for gold affected the native people as well as Europeans.

The Search for El Dorado uses short chapters and explains some of the vocabulary, which makes the book accessible to reluctant readers. Large black and white illustrations appear every 5 to 9 pages that show the astronauts in action. Detailed illustrations give readers a glimpse at the time period’s clothing, ships, and people. While the book is easy enough for young, fluent readers, the content will be interesting to older readers as well. The back of the book contains a timeline, additional books to read, and facts about Colombia, Mexico, and Venezuela.

As the Europeans expanded into the Americas, greed was the root cause of their travels. The Search for El Dorado explores how the explorers negatively impacted the indigenous people. The book focuses on Christopher Columbus, Sir Walter Raleigh, and other explorers. While the book has many interesting facts, much of the book reads like a history book. The author explains that the search for El Dorado is “a shameful chapter in the history of the Americas.” Anyone who is interested in history or the colonization of the Americas should read The Search for El Dorado. However, others may want to skip this particular book.

“Gold is a wonderful thing! Whoever owns it is lord of all he wants,” Columbus. –The Search for El Dorado