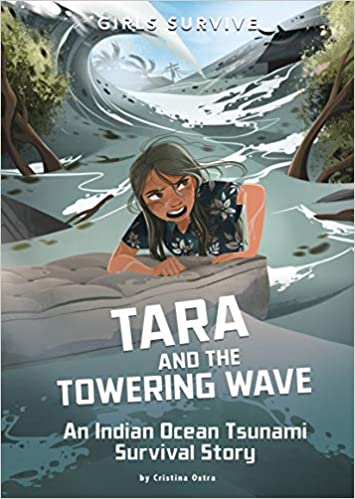 “Trees had been uprooted. Buildings, businesses, and homes had been reduced to a tangled mess of wood, metal, and bricks. It was as if a giant had picked them up, turned them upside down, and shaken out their contents.” –Tara and the Towering Wave

When her mother announces a holiday vacation to Thailand, Tara isn’t thrilled. She’d rather stay home with her friends, but Mom is determined they use the girls’ trip to explore their Thai heritage. Tara is reluctant to travel so far from home, especially to a country she doesn’t feel connected to. But then disaster strikes. The day after Christmas, a massive tsunami sweeps through Phuket, Thailand. Tara’s resort vacation suddenly becomes a fight to survive – and find her mother in the wreckage.

Tara and the Towering Wave explores themes of identity and heritage by focusing on Tara, who is Thai but has never been to Thailand. All of Tara’s information about her heritage comes from her mother, who also grew up in the United States. When people ask Tara about her identity, she is slightly confused about what to tell them because she knows very little about Thailand. The themes are not explored in detail because the focus is on surviving the tsunami.

When the tsunami hits, Tara and her mother are separated but Tara eventually makes it to safety. Afterward, a man helps Tara out of the raging ocean, but her only focus is to find her mother. Often, she is so caught up in her own fears that she doesn’t take other people’s situations into consideration. While her behavior is understandable, it isn’t until she is safely reunited with her mother that she begins to think about others.

The story’s events highlight how people helped each other through this difficult time. Fisherman went out to sea looking for survivors, businesses opened their doors as makeshift evacuations centers, and Tara and her mother helped at the hospital by passing out food and water. As Tara begins to realize the devastation that the tsunami caused, she wonders, “Why were we spared when so many others were not?” She never answers the question, however, she realizes that her and her mother were lucky to survive.

In order to make the story easy to follow, each chapter begins with Tara’s location and the time. Every 10 to 17 pages there is a black-and-white illustration. The illustrations mostly focus on Tara and the events surrounding her. Some of the illustrations show the towering waves but no one’s injuries are included in them. The back of the book contains an author’s note that goes into more detail about the historical facts of the tsunami, a glossary, and three response questions to help readers connect to the reading material.

The Girls Survive Series is similar to the I Survived Series by Lauren Tarshis because both books focus on young protagonists who survive a disaster. Anyone who is interested in survival stories will enjoy Tara and the Towering Wave. After Tara is saved, the action wanes but there is still enough suspense to keep readers engaged. However, the book doesn’t tie up all the loose ends, and readers are left wondering what happened to some of the characters—did they live, or did they die? Despite this, Tara and the Towering Wave will introduce readers to the devastating effects of a tsunami while using kid-friendly details of the destruction. Readers who want to learn about another historic tsunami should also read I Survived the Japanese Tsunami, 2011 by Lauren Tarshis. Readers who want a more in-depth look at historical survival stories should check out the Survival Tails Series by Katrina Charman; this series uses the unique premise of having animals tell the story.

“Trees had been uprooted. Buildings, businesses, and homes had been reduced to a tangled mess of wood, metal, and bricks. It was as if a giant had picked them up, turned them upside down, and shaken out their contents.” –Tara and the Towering Wave