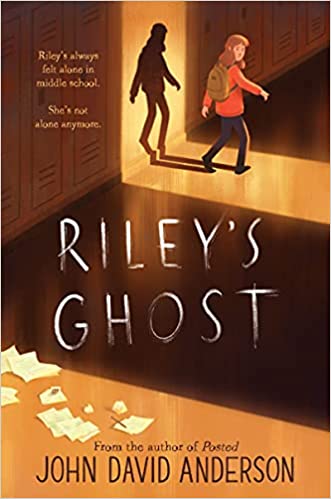 “From everything she’d ever read or seen, ghosts didn’t talk in complete sentences. They moaned or wailed. They screamed like banshees. They rattled chains. They didn’t inquire about your well-being. They didn’t make jokes about warts. None of the ghosts in her father’s stories had a sense of humor,” Riley. –Riley’s Ghost

It feels like she’s been on her own since sixth grade, when her best friend, Emily, ditched her for the cool girls. Cool girls don’t like Riley. They decide one day to lock Riley in the science closet after hours, after everyone else has gone home.

When Riley is finally able to escape the closet, she finds that her horror story is only just beginning. All the school doors are locked, the windows won’t budge, the phones are dead, and the lights aren’t working. Through halls lit only by the narrow beam of her flashlight, Riley roams the building, seeking a way out, an answer, an explanation. And as she does, she starts to suspect she isn’t alone after all.

While she’s always liked a good scary story, Riley knows there is no such thing as ghosts. But what else could explain the things happening in the school, the haunting force that seems to lurk in every shadow, around every corner? As she tries to find answers, she starts reliving moments that brought her to this night. Moments from her own life…and a life that is not her own.

Riley’s Ghost explores the issue of bullying through two girls’ experiences. While the premise is unique—a girl is forced to face her past hurts with the help of a ghost—the story is frustrating because of the frequent flashbacks. Since much of the story is told in the past tense, the story’s pacing is slow and has very few dramatic scenes. When something interesting begins to happen, the story quickly shifts to past events which kills the suspense. While the constant jumps into the past help explain Riley’s behavior, she is not relatable or likable. Riley has often been the target of bullies; however, her own behavior has caused some of her problems.

The addition of Max, a ghost who is using a half-dissected frog as a vessel, should add interest, but the ghost does not evoke sympathy because he is so awful. Instead of helping Riley, the frog does not want to confront his past. Riley is left to guess at Max’s motives. Even at the end, Max learns nothing and only wants to forget about his past mistakes instead of making amends. Plus, the story’s message is confusing because the story shows that most people pay for their mistakes, but “nobody should have to pay for their past mistakes indefinitely.”

Riley’s Ghost takes a hard look at the bullying that can take place during middle school and shows how bullying can have a lasting impact on the victims. Unfortunately, the conclusion is confusing and chaotic, and the lesson is unclear. In the end, the story hints that Riley’s life makes a dramatic turn for the better, but the conclusion jumps to a feel-good ending without showing how Riley was able to make changes. For readers who want to explore the issue of bullying further, Out of Place by Jennifer Blecher and Fortune Falls by Jenny Goebel would be better book selections.

“From everything she’d ever read or seen, ghosts didn’t talk in complete sentences. They moaned or wailed. They screamed like banshees. They rattled chains. They didn’t inquire about your well-being. They didn’t make jokes about warts. None of the ghosts in her father’s stories had a sense of humor,” Riley. –Riley’s Ghost