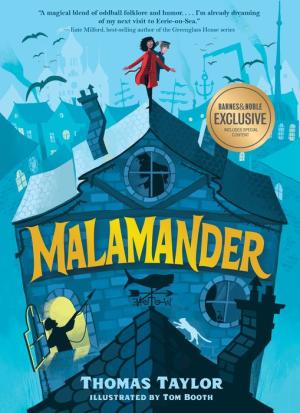 “If the impossible is possible anywhere, it’ll be possible in Eerie-on-Sea,” says Erwin the cat. —Malamander

Twelve-year-old Herbie Lemon has always been fond of lost things. After all, as an infant, he was a “lost thing.” Herbie was found and given a home in the town of Eerie-on-Sea, where he was eventually put in charge of the Lost-and-Foundery at the Grand Nautilus Hotel. His job now is to keep track of every lost item in the hotel and, when possible, find its home.

One day, a new kind of lost thing arrives, inspiring quite an eventful case for the young detective-of-sorts. Violet Parma puts Herbie in charge of helping her track down her missing parents, who became “lost” when she was an infant while staying at the Grand Nautilus. Herbie reluctantly takes the case, and the pair works together, discovering that one legend from the town’s past may have more to do with the Parmas’ disappearance than they could have imagined.

The Parma mystery leads the duo to the malamander, a mythic creature that supposedly lives in the water surrounding Eerie-on-Sea. The malamander only comes inland once a year to lay its wish-granting egg. The power of the egg draws a variety of characters into the fray, including a gruff man with a boat hook for a hand. Herbie and Violet must consult the eclectic townspeople and watch their backs as they work to uncover the mysteries which are hidden in the mist of Eerie-on-Sea.

Taylor wonderfully builds the world of Eerie-on-Sea. From the very first chapter, it is clear Eerie-on-Sea is no ordinary island. It is home to ancient legends regarding the existence of sea monsters, which Herbie and Violet discover to be more fact than fiction. The legends– and the people who tell them– are enthralling, and each person is essential to the story being told. By the end of the novel, readers will feel as if they were on the island themselves.

Herbie is a loveable narrator who provides much needed information about the culture of Eerie-on-Sea. Herbie’s friendship with Violet also helps readers understand the mysteries of such a place. She is new to the island, as is the audience, allowing readers to identify with Violet as they learn about the stories which the townspeople know well. The balance between Herbie and Violet is engaging from their first meeting. Violet is a go-getter, who thinks quickly and is strong-willed. Herbie, while confident in some moments, is much quieter and cautious.

The malamander’s egg is central to many of the characters’ motivations, and Taylor’s story touches on the harmful nature of greed that has lasting effects it can have on others. For example, the legend of Captain K demonstrates how the captain’s desire for the egg causes his entire crew to be lost to the malamander. Captain K wishes for eternal life, and while he gets what he wished for, he becomes a shell of a man. Consequently, Captain K’s family spends generations trying to fix his mistakes. On the other hand, Herbie acts as a counter to this greed. Herbie’s job is dedicated to helping others find what they have lost. His decision to help Violet as well as his concern for the townspeople teach readers that selflessness and caring for others can lead to happiness.

The author occasionally uses advanced vocabulary, but the context clues provided make Malamander a good option for children looking to learn new words. Black and white illustrations bring the quirky characters to life; the illustrations are used periodically to aid in the visualization of some of the more significant moments in the story. Young readers who love mysteries and myths will enjoy Malamander as the story creates an interesting setting that has endearing characters and a gripping plot.

“If the impossible is possible anywhere, it’ll be possible in Eerie-on-Sea,” says Erwin the cat. —Malamander