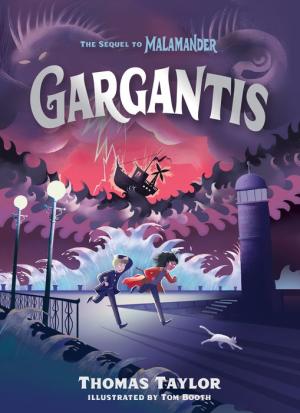 Other books by Thomas Taylor

“If you ﬁnd something that is lost, and you know who it belongs to, there is NO DOUBT AT ALL what you should do. Even if it does involve facing your greatest fear and voyaging to the cold, dark bottom of the sea to do it,” Herbie Lemon. –Gargantis

Herbie Lemon and Violet Parma team up once again to solve another Lost-and-Foundery mystery. This time, the outcome of the case has implications on the entire island. Eerie-on-Sea is under attack as a violent storm, nicknamed Gargantis, tears through town, destroying buildings and causing stormquakes (earthquakes caused by the storm).

Amid the chaos, another case presents itself to Herbie. Mrs. Fossil has found a mysterious bottle on the beach. It seems to move on its own and has indecipherable ancient writing on its side. Everyone claims to be the bottle’s rightful owner. Dr. Thalassi and Mrs. Fossil want it for their respective collections. The town’s fishermen say it is theirs due to the presence of their own ancient language on the side. However, a frightening man in a hood makes it clear that he wants the bottle more than anyone and he is willing to sacrifice everyone in Eerie-on-Sea to get it.

Some want to discover what the writing on the bottle means, what fairy-like creature is living inside, and why the man in the hood wants it so badly. They seek the help of Blaze Westerley, a young, outcasted fisherman. Blaze’s uncle was recently lost at sea while investigating the ancient legends of the Eerie fishermen. Soon, Herbie and Violet realize the legends may be more relevant to the case than they initially believed. In fact, if they can crack the case of the fish-shaped bottle, they may be able to save Eerie rock from the terrible Gargantis.

Gargantis shows off the charming relationship between Herbie and Violet as they take on the town’s adults. Blaze Westerley is a welcome addition as he diversifies the group. Blaze is a little unsure of himself, but confident in his uncle’s mission. He, too, is a bit of a “lost thing” like Violet and Herbie were before him. The trio works well together, and each person has skills and knowledge that contribute to solving the mystery.

The book dives a bit deeper into Herbie’s backstory. He must reconcile his fear of the sea with his love of finding homes for lost things. Since the bottle came from the ocean and most of the people who want it are fishermen, Herbie spends a lot of time doing things that scare him, such as being on boats far away from shore. Herbie’s experiences develop the theme that sometimes we must do what scares us in order to help ourselves and others.

The story also highlights how a new perspective can bring the truth to light. Without Blaze’s input or Violet’s seemingly “bonkers” ideas, the mystery would not have been solved. Taylor also applies this idea to Herbie’s book from the mermonkey. Herbie believes that the cover of the book is a message that he will meet his end at the bottom of the sea. However, he never reads the contents, which say something different. In the end, the townspeople gather and give their own interpretation of the cover, none of which end with Herbie drowning. The book, therefore, reinforces the importance of perspective and the value of individuality.

The fast-paced book introduces new characters and interweaving plotlines. For this reason, it is recommended that readers not read Gargantis as a standalone. In addition, the resolution may fall flat for those who did not read the first book, Malamander. Black and white illustrations bring some added visualization to some of the scenes. Plus, the characters are just as charming and quirky as before. If readers enjoyed Malamander, they are likely to enjoy Herbie and Violet’s deep dive into the ancient fishermen’s legends.

Other books by Thomas Taylor

“If you ﬁnd something that is lost, and you know who it belongs to, there is NO DOUBT AT ALL what you should do. Even if it does involve facing your greatest fear and voyaging to the cold, dark bottom of the sea to do it,” Herbie Lemon. –Gargantis