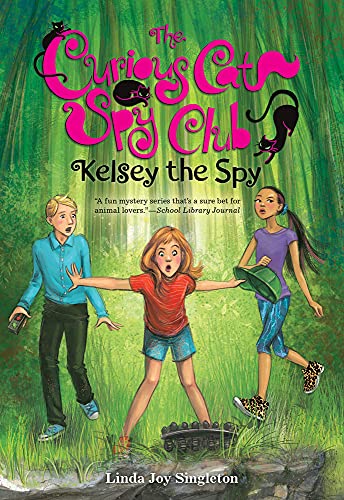 Kelsey thinks, “We sit awhile in silence: thirteen-year-old girl and hundred-thirty-year-old tortoise. Different species yet we have something in common: we both miss our friends.” –Kelsey the Spy

Kelsey can’t resist collecting secrets in her spy notebook just like her hero, Harriet the Spy. When she learns Leo has been hiding something from the group, she writes his secret in her notebook as well. But when the notebook goes missing, everything she’s collected about classmates, friends, and family could be revealed to the world! After receiving a ransom note, Kelsey tries to solve the mystery on her own. But soon she realizes she needs help from everyone in the Curious Cat Spy Club in order to rescue her notebook, help a homesick 130-year-old Aldabra tortoise, and unmask a thief.

When Kelsey’s notebook of secrets disappears, she is consumed with fear that the secrets will be revealed and someone will be hurt. When one of her secrets goes public, Kelsey is convinced that the thief must be stopped. Kelsey’s fear and worry drive much of her actions, but the constant reminders of the dangers of keeping secrets becomes annoying. While Kelsey’s concerns are justified, Kelsey’s inner monologue may frustrate readers.

The story’s focus is on Kelsey’s stolen notebook, which doesn’t allow room for the other subplots to be adequately explored. For example, a lost dog that Kelsey is hoping to find only appears twice and the encounter is so short that it does nothing to add to the story. Part of the story includes interesting facts about an Aldabra tortoise, but animal-loving readers will wish that more time was devoted to the tortoise. Even though the animal aspect of Kelsey the Spy reinforces the theme of not keeping secrets, the subplot lacks depth.

Readers will relate to Kelsey’s friendship problems. As Kelsey struggles with finding the notebook thief, she also has a difficult time with the changing nature of her friendships. When Kelsey’s friends are too busy to spend time with her, Kelsey gets frustrated. Kelsey finally talks to her friends about how she feels, which allows them to work through their problems. In the end, she realizes that friendships change, “rising and falling, then coming back together stronger than ever.”

Kelsey the Spy has an inquisitive protagonist who helps put on a fundraiser for a local shelter. Kelsey is a typical preteen that many readers will relate to. However, the plot tackles too much—Kelsey’s brother who is sneaking around, a lost dog, the missing notebook, and the tortoise who needs a new home. Because of the many subplots, the story jumps around a lot. Kelsey the Spy does have some fun elements to keep readers engaged. Plus, it teaches important lessons about teamwork, friendship, and the dangers of keeping secrets. Even though Kelsey the Spy is the third book in the series, it can also be read as a standalone. Middle-grade mystery-loving readers should also read the Friday Barns Series by R.A. Spratt.

Kelsey thinks, “We sit awhile in silence: thirteen-year-old girl and hundred-thirty-year-old tortoise. Different species yet we have something in common: we both miss our friends.” –Kelsey the Spy