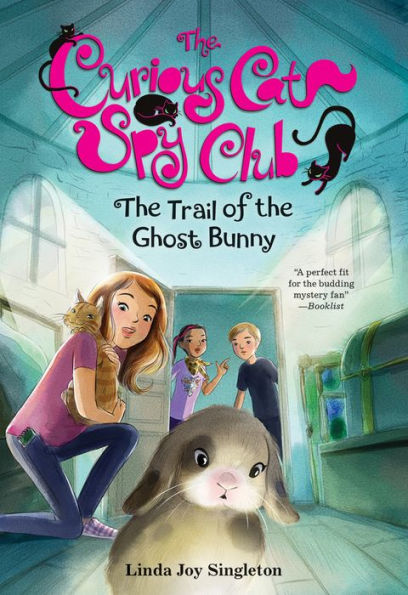 “Memories are ghosts of the past,” Philomena. –The Trail of the Ghost Bunny

Kelsey’s family has moved into an old bed-and-breakfast that they’re fixing up, and the property comes with a resident: an adorable bunny named Trixie! But the inn also comes with rumors of a hidden treasure and a ghost. Something strange is definitely going on! Can the Curious Cat Spy Club figure it out and find the treasure before someone else does?

Kelsey, Becca, and Leo—with the help of their new bunny friend—are on the case. The sixth and final book in the Curious Cat Spy Series will satisfy readers.

The Trail of the Ghost Bunny is the perfect blend of spooky suspense and mystery. The story begins with a spooky tale of a dead girl, treasure, and the ghost that haunts her old house. Kelsey is determined to find the treasure, but that doesn’t stop her from helping the local animal shelter with a fundraiser. The story expertly weaves Kelsey’s school life, her home life, and her hunt for treasure.

As Kelsey tries to find the treasure, she must decipher a riddle, follow a rabbit, and gather clues. As she searches, she meets a new friend named Lyric, but soon she wonders if Lyric can be trusted. When Kelsey starts hearing strange noises when no one else is at home, she’s convinced that the ghost is real. The spooky events are mild, but they help build suspense. The conclusion will satisfy readers because it ties up all of the story’s threads and explains all of the mysterious clues.

The Trail of the Ghost Bunny will appeal to both animal lovers and mystery buffs. The story will entertain readers with a likable main character, relatable conflicts, and an interesting cast of characters. Even though the story has a large cast of characters, the unique characters are easy to remember. Whether you’ve read the previous books in The Curious Cat Spy Club, or are reading the series for the first time, The Trail of the Ghost Bunny will entertain you and have you dreaming of finding your own buried treasure.

“Memories are ghosts of the past,” Philomena. –The Trail of the Ghost Bunny