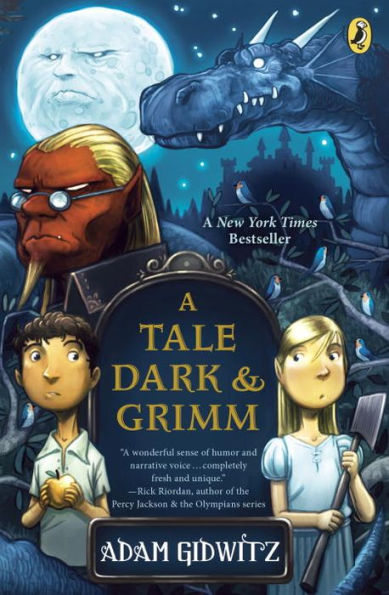 Hansel and Gretel were once children who had to run away from their own scary story, but when they flee, they find eight other scary fairy tales that they must endure. As the children run, they encounter witches and warlocks, hunters with deadly aim, and a baker with ovens that are just right for baking children. . .

Gidwitz retells the fairy tale of Hansel and Gretel, plus expertly weaves pieces of other fairy tales into Hansel’s and Gretel’s story. Like the title suggests, Gidwitz’s version of Hansel and Gretel is both dark and grim. Many scenes are described in bloody detail, and there is no shortage of scary characters, including an evil witch, the moon, and the Devil. Parents and many adults are portrayed in a negative light, which is the main reason Hansel and Gretel continue to run away. They just can’t seem to find a family that has caring parents.

A Tale of Dark and Grimm describes a world full of terrible monsters, evil humans, and violent death. Readers who enjoy being frightened will want to jump into Hansel and Gretel’s fairy tale story. However, younger readers may be so frightened that they will crawl into their parents’ beds for many nights to come. This unique look at Hansel and Gretel will give readers a better understanding of the original fairy tales as well as add some surprising twists.

In the story, Johannes, a faithful servant, explains the importance of understanding others. He understood the king and queen in the “ancient sense. I understood. . . I planted my feet beneath them and took upon my shoulders their burden—their choice, their mistake, and their pain.” The story highlights the importance of forgiveness, but also acknowledges that a person may not be ready to forgive.

Throughout the story, the narrator breaks in and warns the reader about parts that may be upsetting. For example, Gidwitz writes, “if you’re feeling sick to your stomach because of all the blood, now’s a great time to stop.” The narrator’s voice adds humor as well as breaks up tense scenes. A Tale of Dark and Grimm is broken up into short, easy-to-read sections. A Tale of Dark and Grimm is highly entertaining, frightening, and at times humorous. Readers looking for a scary story will enjoy the Hansel and Gretel retelling and will cheer when the two children are able to defeat evil and finally return home.