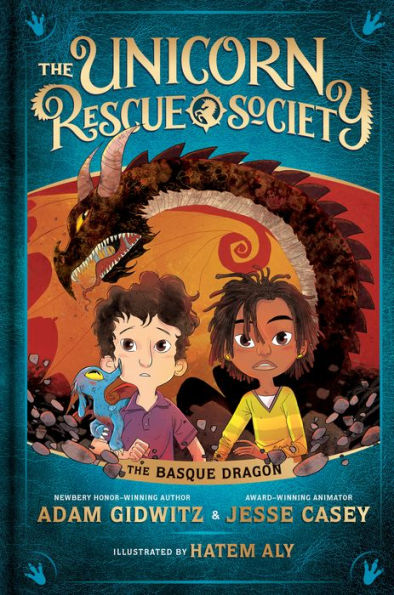 But today, I witnessed firsthand what can be accomplished with courage, teamwork, and courage!” Professor Fauna. —The Basque Dragon

As members of the Unicorn Rescue Society, Elliot and Uchenna know that mythical creatures exist. But Elliot’s unprepared for the strange events he encounters. As he leaves for school, Elliot finds a mysterious package on his front step. He opens the package and finds a book called The Country of Basque. When Elliot gets to school, he meets up with Uchenna. Professor Fauna approaches them—he needs their help.

Soon, the two friends are whisked away in Professor Fauna’s plane and heading across the ocean to the mountains of the Basque Country. The members of the Unicorn Rescue Society must find and save a missing dragon. Can the group track down the kidnapped dragon? And if they find the dragon, how will they stay alive long enough to save it?

An action-packed fantasy, The Basque Dragon is full of adventure, mystery, and humor. Elliot and Uchenna show how two people who are completely different can still be friends. Elliot would rather read about mythical animals than meet them. His fearful nature is a fun contrast to Uchenna’s adventurous, courageous spirit. Uchenna is not portrayed as a stereotypical girl; she is capable, strong, and smart.

In order to enjoy the story, readers will have to suspend their disbelief. There are several events that are unrealistic. For example, the professor parks his beat-up single-prop plane in the school parking lot. The group flies across the Atlantic in the beat-up plane, which the professor does not know how to land. Despite the professor’s lack of skills, the group still makes it safely to the desired location. Another unrealistic event is that even though the group leaves New Jersey after school, Elliot and Uchenna are still able to make it home in time for dinner.

One disturbing aspect of the story is that Elliot and Uchenna go to Europe with Professor Fauna, even though they don’t trust him. To make matters worse, they lie to their parents and say they were at school participating in a club—the Worm Nutrition Club.

The second installment of The Unicorn Rescue Society can be read as a stand-alone book; however, readers will enjoy the book more if they read The Creature of the Pines first. The Basque Dragon will keep younger readers entertained with its rapid pace, humorous tone, and diverse characters. Black-and-white illustrations are scattered throughout the book; the illustrations add humor as well as help readers visualize the characters. Most of the text is easy to read because it uses short paragraphs, simple vocabulary, and dialogue. However, adding the Basque language makes reading parts of the story laborious. Even though the evil villain is predictable and some of the events are unrealistic, The Basque Dragon will entertain readers while exploring the difference between independence and isolation.

But today, I witnessed firsthand what can be accomplished with courage, teamwork, and courage!” Professor Fauna. —The Basque Dragon