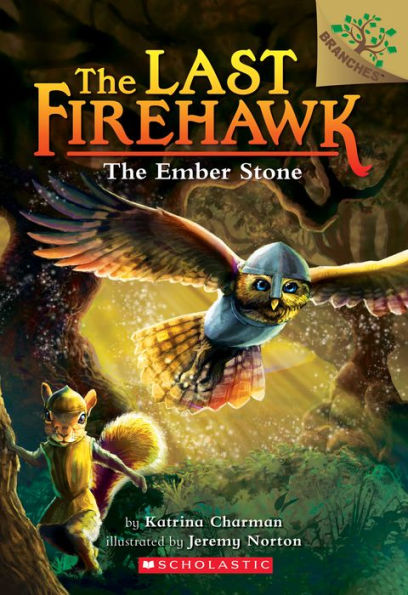 The powerful vulture, Thorn, is using dark magic to destroy Perodia. Tag, a small owl, and his best friend, Skyla, want to save their home. Tag hopes to join the Owls of Valor and become a brave warrior. Tag is small and inexperienced, but he is brave. When Tag and Skyla meet the last firehawk, the three begin a journey in search of the magical Ember Stone. Can the three friends find the stone and save Perodia?

Written for newly independent readers, The Ember Stone will appeal to adventure seekers. The story has many elements that will keep readers interested. The illustrations show emotion, and the tiger bats add danger and suspense to the story. Mystery is added when Tag and Skyla come across a magical golden egg. Onomatopoeias are scattered throughout the beginning of the story, which makes reading fun as well as adds to the threatening mood. Short sentence structure, dialogue, and simple vocabulary make The Ember Stone easy to read. Black-and-white illustrations appear on every page, which helps bring the story to life.

Tag is a brave little owl, who wants to help stop the dark magic from destroying his home. Although Tag is clearly the hero in the story, he finds the firehawk egg and a piece of the Ember stone by accident. Tag has the bravery to be a hero, but his actions lack intention. The hope that the newly hatched firehawk will learn to speak soon, and will then be able to “tell us what to do” is unrealistic.

The book begins with an introduction to help readers understand the conflict. A two-page map of Perodia gives a visual of the geography and location of important landmarks. The last page of the book contains four questions and an activity, which will reinforce important comprehension skills. Readers who love animals and a good adventure will enjoy The Ember Stone.