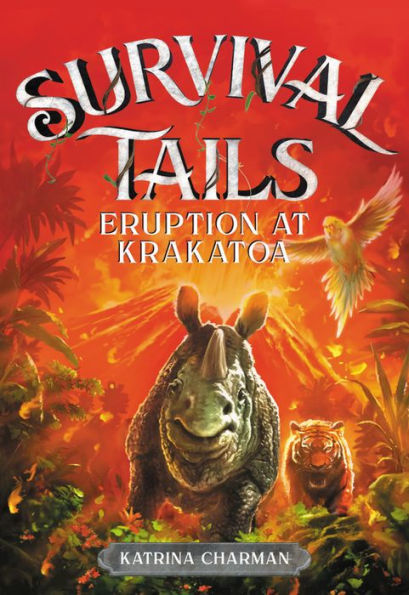 “Nature has a way of putting things right,” Dewi. –Eruption At Krakatoa

Parakeet Melati lives with the rest of her bird friends and family on the beautiful slopes of the Indonesian island of Krakatoa. But one morning Melati’s peaceful home is shaken by tremors stronger than she’s ever felt before—her sleeping island volcano has awoken!

Across a narrow stretch of water lives Budi, a rhinoceros, with his old friend, Raja, a tiger and the king of the jungle. They are blissfully unaware of the vibrations on Krakatoa until Melati arrives with a warning that they must flee. Raja believes the animals will be safe in the jungle, but Budi worries something terrible is about to happen, and he urges Raja to take action.

As ash rains down on the island and the rumblings worsen, Raja must put aside his fears and trust Budi’s instincts if they are to have any chance at surviving the mighty eruption of Krakatoa . . . and saving the one place they call home.

Told from the animals’ point of view, Eruption At Krakatoa shows the historical events of the 1883 volcanic eruption. However, the story doesn’t just show the devastation of the animal’s habitat. The story also includes information on how the eruption caused devastation on human villages as well as a resulting tsunami that killed many on land and at sea.

While most of the intense action comes from the exploding volcano and the tsunami, Raja’s story adds an interesting element. As king of the jungle, Raja is afraid of humans and lacks leadership skills. Even though the animal kingdom looks to him for guidance, Raja runs from the responsibility and allows fear to control him. Raja’s personal growth and his friendship with Budi are inspiring. Raja learns that not all humans are to be feared because not all humans are bad.

Eruption At Krakatoa is a tale of bravery and friendship. This action-packed story will keep readers flipping the pages until the very end. Readers will relate to the animals, who must overcome fear, injury, and exhaustion in order to survive. The surprising and heartwarming conclusion ends on a hopeful note. The end of the book has historical background, a timeline, and animal facts. The author’s notes tell about Charman’s research and artist William Ashcroft, who painted over five hundred canvases of the atmospheric changes that the eruption caused. Readers should take time to research his paintings.

Both history buffs and animal lovers will enjoy Eruption At Krakatoa. Five black and white pictures are scattered throughout the book and help bring the scenes into sharper focus. Although this story is the fourth book in the Survival Tails Series, each book is an independent story. Readers interested in seeing history through a dog’s eye should add the G.I. Dogs Series by Laurie Calkhoven to their reading list.

“Nature has a way of putting things right,” Dewi. –Eruption At Krakatoa