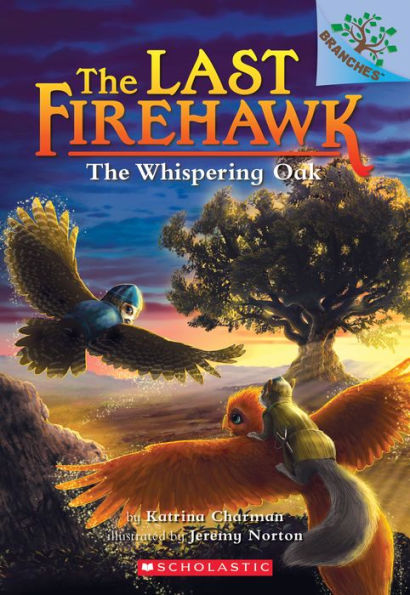 In order to find the third piece of the magical Ember Stone, Tag, Skyla, and Blaze will have to cross the tornado-filled Shifting Sands. The Ember Stone can be found close to the Whispering Oak, but the way is dangerous and Thor’s spies are everywhere. Can the three friends save Perodia? Will Thorn’s spies beat them to Whispering Oak and find the Ember stone first?

The third book in The Last Firehawk series follows the same format as the first two books. The three friends travel to a new location, encounter Thorn’s spies, and meet new friends that help them find the next piece of the Ember Stone. New characters—talking bees and grumpy bears—add a new element to the story that brings interest. The three friends continue to use teamwork and must use logic to convince the bees to give them the Ember Stone.

The Whispering Oak will introduce newly independent readers to the adventure genre. The Whispering Oak should be read after the first two books in the series. Onomatopoeias make reading fun as well as add to the threatening mood. Short sentence structure, dialogue, and simple vocabulary make The Whispering Oak easy to read. Black-and-white illustrations appear on every page, which helps bring the story to life.

The book begins with an introduction to help readers understand the conflict. A two-page map of Perodia gives a visual of the geography and location of important landmarks. The last page of the book contains four questions and an activity, which will reinforce important comprehension skills.