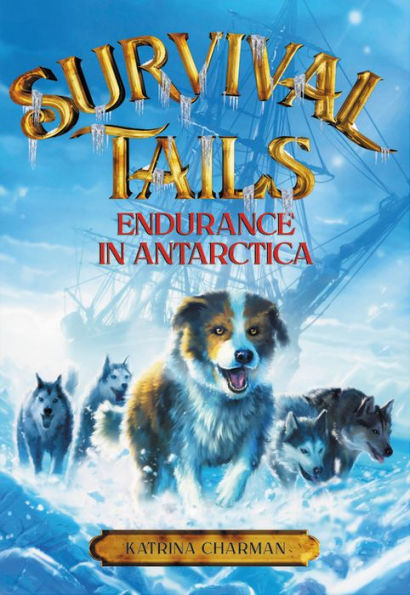 “If the boss believed in him, Bummer thought, maybe it wouldn’t be so wrong to believe in himself a little more.” –Endurance in Antarctica

The sled dog Samson can’t wait to be a part of Ernest Shackleton’s historic voyage to Antarctica. Samson wants the honor and recognition that will come if they complete the dangerous voyage. He is eager to feel the snow under his paws and the wind on his face as he races across the ice fields. Samson wants to be a leader and help the humans survive on the unexplored continent.

While in the kennel waiting for Shackleton to decide which dogs to take, Samson meets Bummer. Unlike Samson, Bummer is scared to go on an ice-filled adventure that may end in death. Bummer knows he isn’t as big or as strong as the other dogs. His only goal is to survive the dangerous icy weather.

Bummer’s worse fears come true when their ship, the Endurance, becomes trapped in sea ice, leaving the dogs and men with no way home. Their journey quickly stops being about glory and becomes about survival. Samson, Bummer, and the other dogs will have to put aside their differences and band together to rescue the humans—and themselves.

Instead of focusing on the human explorers, Survival Tails: Endurance in Antarctica is told from the sled dogs’ point of view. Throughout the journey, Samson, Bummer, and several of the other dogs’ unique personalities come to life. Instead of only focusing on a dog’s good or bad qualities, Charman creates imperfect characters who make mistakes. Much like the humans, the dogs are at times prideful, loyal, hardworking, and heroic.

Survival Tails: Endurance in Antarctica uses historically accurate facts to bring the harsh conditions of the Antarctic voyage to life. Much of the action comes from the rivalry between the dogs and the harsh conditions the animals must face. However, the friendship between Samson and Bummer will keep readers interested until the very end. Readers will fall in love with the dogs and learn about the complicated nature of friendship as well as the importance of forgiveness.

A tale of bravery, friendship, and sacrifice, Survival Tails: Endurance in Antarctica will entertain both animal lovers and history buffs. The story has several surprises that highlight how the smallest dog is capable of heroic deeds. Four black and white pictures are scattered throughout the book and help bring the scenes into sharper focus. At the end of the book, readers will find a glossary, as well as more historical information about the Endurance expedition. Although this story is the second book in the Survival Tails series, each book is an independent story and can be read without the context of the other books. Survival Tails: Endurance in Antarctica will leave readers with new knowledge of history and has a conclusion that will make readers smile.

“If the boss believed in him, Bummer thought, maybe it wouldn’t be so wrong to believe in himself a little more.” –Endurance in Antarctica