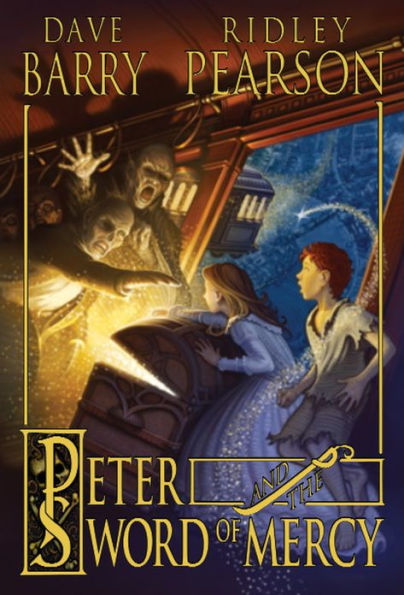 “I’ve been on this island for more than twenty years. I’ve heard nothing from Mol—from any of you Starcatchers. And now, suddenly, when there’s trouble, you ask me for help,” Peter —Peter and the Sword of Mercy

Peter and the Sword of Mercy

Life on the island has continued peacefully for many years. With fallen starstuff in the island’s water supply, no one gets sick and no one ages. So Peter is very surprised when Wendy—Molly’s daughter—shows up on the island in desperate need of help.

Wendy grew up with no idea that the starcatchers existed. After Peter and Molly’s adventure in Rundoon, starstuff stopped falling and it was thought that no more of the Others existed. So the starcatchers stopped recruiting new members and faded to a tiny group of mostly elderly members. Needless to say, the starcatchers are not prepared when trouble brews anew. After both of Wendy’s parents disappear, Lord Aster—elderly and bedridden—tells Wendy there is only one person who can help: A very special boy on an island that is very hard to find.

For fans delighted with the Starcatcher series, as well as the fans who were disappointed with the first two sequels, this final installment ends the series with a flourish! Harkening back to the glory of the first book, Peter and the Sword of Mercy has action and mystery galore. Readers will be shocked when encountering old friends who are twenty years older than in the last book. An elderly Lord Aster and a fading starcatchers’ society are a shock to Peter, as is learning that Molly married George and had a daughter named Wendy.

The mix of old and new characters carries the story along at a breakneck pace. Rather than the fractured storylines that made the last installment difficult to relate to, this book returns to the original book’s more streamlined approach. Readers still follow events from several character’s points of view, but by focusing largely on Peter’s point of view. Peter and the Sword of Mercy succeed in emotionally engaging readers. The shifts in point of view are well-done, are never confusing, and allow readers to view events happening with Peter’s friends as well as the events put in motion by the Others.

With non-ending action, a broadcast of colorful characters, and the emotional rollercoaster ride of returning to London after twenty years, Peter and the Sword of Mercy is a glorious ending to a beloved series.

“I’ve been on this island for more than twenty years. I’ve heard nothing from Mol—from any of you Starcatchers. And now, suddenly, when there’s trouble, you ask me for help,” Peter —Peter and the Sword of Mercy