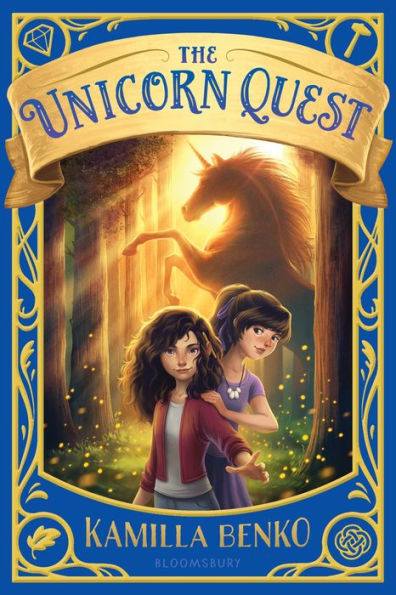 “It was hard to be brave in your pajamas,” Claire. —The Unicorn Quest

Claire’s great-aunt Diana mysteriously disappeared. As her only family, Claire, Sophie, and her parents plan to spend the summer cleaning out Diana’s house, which is cluttered with her aunt’s collection of strange artifacts. When Claire and Sophie discover a ladder in the fireplace, Sophie leads the way up. . . and up. . . and up. They discover a fantastical land called Arden, filled with castles, magic, and dangerous creatures. Claire makes Sophie promise never to climb the stairs again.

When Sophie disappears, Claire knows she must be brave enough to search for her sister by going up the ladder. When Claire gets to Arden, she discovers a world full of danger. Four guilds of magic no longer trust each other. All of the unicorns have disappeared. Horrible wraiths roam at night. And Sophie is missing. Claire must find the courage to search for her sister, but first she must discover the secret of the unicorns.

Claire is fearful that her sister is in danger, which propels her to team up with two others—Netta and Sena—in order to find Sophie and a stolen unicorn relict. Because Arden’s war happened in the past, the action included in the book is not scary. Instead, readers will be enthralled with Arden’s strange creatures and magic.

The land of Arden is well developed, and the author uses beautiful descriptions to bring the setting to life. Even though the story contains some exciting scenes, the long descriptions slow down the pacing of the plot. The story follows a typical epic format—a girl is forced to go on a quest, teams up with others, and travels from place to place searching for answers. Readers expecting a story about sisters and unicorns will be disappointed, because there is little interaction between Claire and her sister, and the unicorn only appears for a brief flash at the end.

The Unicorn Quest will entertain strong readers who like reading about magical lands and characters going on a quest. Although the story is not unique, Claire is a believable character that overcomes her fear as she searches for her sister. The sweet ending has several surprises and will leave the reader wanting to pick up the next book in the series—Secret in the Stone. The Unicorn Quest will appeal to those who like stories such as The Last, by Katherine Applegate, and Podkin One-Ear, by Kieran Larwood.

“It was hard to be brave in your pajamas,” Claire. —The Unicorn Quest