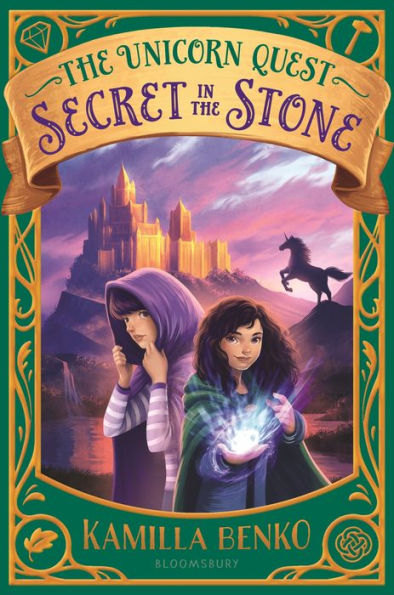 “I discovered that freedom to live the way you want is its own kind of treasure, more valuable even than ancient masterpieces and works of great art,” Nadia. –Secret in the Stone

Secret in the Stone

Claire and her older sister, Sophie, never imagined that climbing a ladder in a fireplace would take them to another world—Arden. Arden used to be a land of unicorns and magic. Now, the unicorns and the great guardians of magic have disappeared. The sisters, the only descendants of Arden’s royal family, can bring all the unicorns back.

Claire doesn’t think Sophie should be the heir—Sophie is the brave one, but Sophie lacks magic. The two sisters travel to Stonehaven, a Gemmer school on Starscrape Mountain, where Sophie hopes to learn how to be Arden’s heir and harness the magic of stone. The fate of Arden relies on Sophie learning how to wake the legendary moontears and bring back the unicorns. As Claire and Sophie make the treacherous trek to bring back the unicorns, they realize that some allies are traitors in disguise. With danger lurking around every corner, can the sisters unlock the secret of the unicorns before it’s too late?

Secret in the Stone focuses on the complicated sibling relationship between Claire and Sophie. Claire feels inferior to Sophie, who always acts brave, confident, and decisive. Like many siblings, Claire and Sophie do not have a calm relationship, instead they argue and fight. At one point Claire tells Sophie, “I hate you!” However, as soon as Sophie needs her, Claire jumps into danger to help her. The story highlights the girls’ love for each other and their willingness to help each other at all costs.

The story weaves in background information from The Unicorn Quest, which helps the reader keep track of the important events that happened in the previous book. Like the previous book, Secret in the Stone builds an intriguing world that revolves around warring guild villages. The story has a vast cast of characters, many of which only appear for a brief period; this may confuse some readers.

Several themes run throughout the book. Readers will learn the dangers of making assumptions about other people as well as the importance of forgiving each other. Another theme the book reinforces is the importance of thinking about how your actions affect others. Often, even when the characters have good intentions, their actions lead to negative consequences. The story also shows that when evil exists, people must face it. When Claire meets a neutral village, she tells the leader, “It’s not fair—you can’t just keep your eyes shut when the world around you is falling apart! You have to do something! What kind of a safe place is this if you’re ignoring the real problems Arden is facing?”

Secret in the Stone is an engaging story that will keep readers turning the pages. However, the book is a stepping stone to book three. The story doesn’t resolve any of the conflicts, but rather sets the story up for the next book. Readers who expect a book about unicorns will be disappointed because unicorns never appear in the story. Secret in the Stone will delight readers who want to enter a world of magic; however, readers must read The Unicorn Quest first. Readers who enjoy Secret in Stone should add the Sisters of Glass series to their reading list because the book also takes readers to a captivating world where magic exists.

“I discovered that freedom to live the way you want is its own kind of treasure, more valuable even than ancient masterpieces and works of great art,” Nadia. –Secret in the Stone