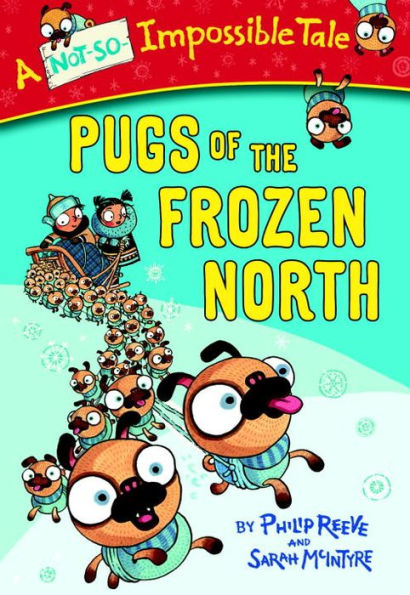 "Friends don't leave friends behind to do dishes for yetis!" –Pugs of the Frozen North

Pugs of the Frozen North

by Philip Reeve and Sarah McIntyre

True Winter comes once in a lifetime. It turns everything into a magical wonderland and gives people an opportunity to win a legendary sled race. Whoever wins can make one wish that will come true.

Two friends, Siska and Shen, embark on a fantastical journey to win the race with sixty-six pugs pulling their sled. Along the way, they encounter many obstacles, including spaghetti-eating yetis, singing snow, and other racers. As they complete the journey, they discover that friendship is more important than winning.

Pugs of the Frozen North is a fun-filled story with outrageous characters, interesting obstacles, and snow that comes to life. Although the story focuses on Siska and Shen, the other characters are extremely funny and help add suspense to the story. The race generates kid-appropriate conflict that will keep the reader guessing and giggling as they watch pugs (and polar bears and dogbots) race to the top of the world.

The story is easy to read and engaging. However, the story doesn’t come to an end when the racers arrive at the top of the world and meet Snowfather. Once the racers reach their destination, the story becomes less interesting and readers may have a difficult time reaching the end of the story. The ending deals with the death of Siska’s grandfather, which may cause some children to have questions about what happens at the end of one’s life.

"Friends don't leave friends behind to do dishes for yetis!" –Pugs of the Frozen North