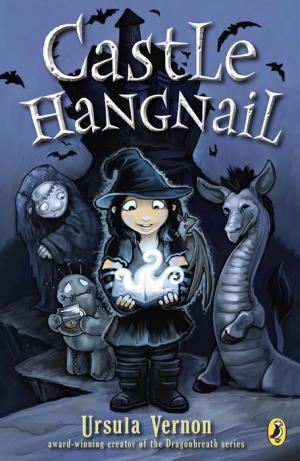 “Deep down, she and Eudaimonia weren’t that different. They both wanted a place of their own, a place where they could do magic without someone coming along and stopping them,” Molly. –Castle Hangnail

When twelve-year-old Molly appears on their doorstep claiming to be the new Master of the castle, every minion in Castle Hangnail is doubtful. Molly’s short height and politeness are different from the tall, intimidating Masters of the past. However, the castle needs a Master or else the Board of Magic will decommission the castle, leaving the minions without a home. Molly assures the minions that she is a bona-fide Wicked Witch and begins completing the Tasks required by the Board of Magic, leaving everyone with hope. But Molly has a few secrets—the biggest one being that she is not who she claims to be.

Castle Hangnail uses tropes of old-school baddies to create a humorous story that will leave readers laughing. Molly hides her secrets as she is learning magic, casting magic, and imitating the wickedness of the previous Masters. Majordomo, the head of the minions, finds out that Molly was not the intended Master and confronts her about her claim to Castle Hangnail. When the intended Master, a Sorceress named Eudaimonia, arrives to take the castle by force, Molly and the minions work together to defeat her.

At Castle Hangnail, Molly interacts with many magical creatures, all of which are based on the supernatural and fantastic. To add to the zaniness, stories about the former Masters are sprinkled throughout the book. At one point, Majordomo talks about the previous Vampire Lord, who “liked to keep the hearts in jars in the basement, but he was rather old-fashioned.” Stories about the former Masters and snippets about the magical creatures add levity and humor to the story. Readers will enjoy the humor of the story as well as how Molly finishes the Tasks and defeats Eudaimonia.

Fun black and white illustrations of the characters and scenery add to the hilarity of the book, alongside two-page spreads so readers can visualize the happenings in Castle Hangnail. The blend of text and pictures help to keep younger readers engaged with the story. The beginning is slow because of the initial worldbuilding, but the interactions between Molly, the minions, and the villagers keep the action going. Castle Hangnail shows the value of standing up against bullies and will engage even the most reluctant readers. Although Castle Hangnail is a stand-alone title, readers will be asking for a continuation of Molly’s adventures. Readers who enjoy Castle Hangnail may also want to try Ursula Vernon’s series Dragonbreath.

“Deep down, she and Eudaimonia weren’t that different. They both wanted a place of their own, a place where they could do magic without someone coming along and stopping them,” Molly. –Castle Hangnail